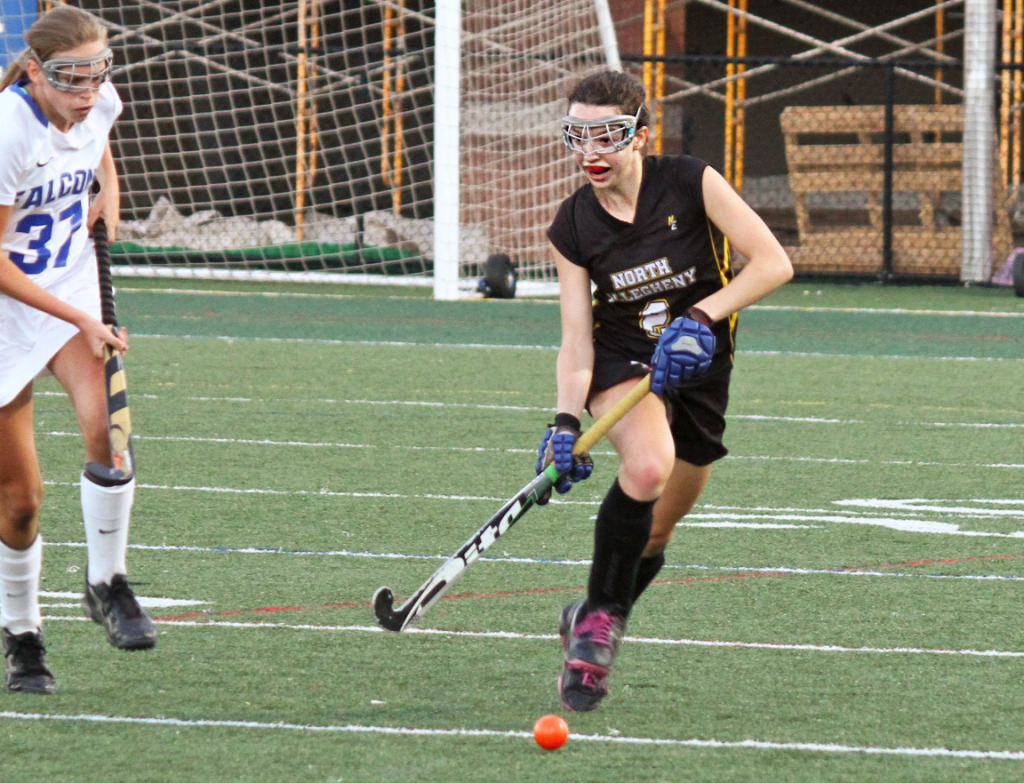 The Tigers field hockey team took a road trip to central Pennsylvania on Saturday to meet two of the top teams in the state, Cumberland Valley, ranked #5 and Lower Dauphin, ranked #1.  Lower Dauphin, host of this weekend’s annual tournament known as the Falcon Classic, won the PIAA State Championship in 2012 and 2013 and carries an astounding 21 seniors.  Nearly all of their starters have committed to Division I and II colleges on athletic scholarships. The Tigers have been playing against this perennial powerhouse along with Cumberland Valley and other strong District 3 teams for several years to face stiffer competition and boost the Tigers’ level of play.

The tournament began with Cumberland Valley (CV) falling to Lower Dauphin (LD) 4-0.  The Tigers faced CV next, coming up short by a score of 3-1.  CV took the early lead when they penetrated the Tiger defense to score in the first minute of play.  The Tigers would keep the match close, tying the game with 8 minutes remaining in the half when senior Kailey Vogl inserted the ball on a penalty corner and Nicole Burns received and passed to Megan Guzzardi, who drilled the ball into the net with a slap shot.  CV would answer with their second and third goals over the next four minutes and the game would end with a final score of 3-1.  The Tigers tallied two penalty corners and six shots on goal in the match, though only managing to beat the sharp CV goalie once.  On the defensive side, the Tigers gave up only two penalty corners in the contest.

After a break between games, the Tigers geared up to face the Lower Dauphin Falcons.  The pace of the contest was quick from the onset, with the Tigers keeping pace with the Falcons.  Lower Dauphin’s aggressive style placed them in the Tigers’ defensive zone early and often, where they were able to generate 6 penalty corners in the first 12 minutes of play.  LD tallied 3 goals within the first nine minutes and a fourth later in the half.  Though halftime would see the Tigers with a 4-0 deficit, they refused to quit and they created some of their own scoring chances in the second half, tallying three shots on goal before they connected on the fourth shot which became the first goal NA has scored against Lower Dauphin in their matches over the past three seasons.  With 15 minutes remaining in the game, senior Hannah Downing feathered a long pass from the sideline to senior Jessica Brandon in the midfield.  Brandon broke through the Lower Dauphin defense and took a quick shot from the right of the cage that beat the goalie and put the Tigers on the scoreboard. The game would end with a 4-1 loss, but the Tigers can be pleased with their overall performance against the 2013 PIAA State Champs and September’s #2 ranked team in the nation.

The Tigers were aided by net-minders senior Isley Smith and sophomore Katie Shideler who split time in both games.  Smith tallied 13 saves and Shideler had 9 in the goalies’ busiest two-game stretch this season.  Tiger seniors Megan Guzzardi and Kendra Downey received Falcon Classic All-Star Team honors for their contributions to NA’s efforts in the tournament.