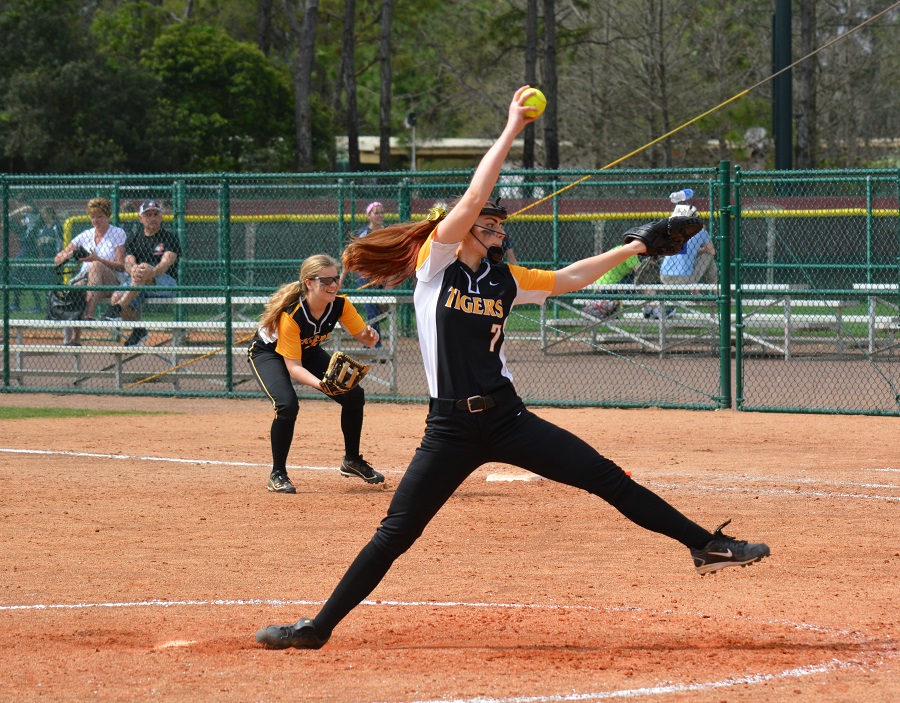 Sophomore Madi Beining tossed a complete game, five-hit shutout and the North Allegheny Tigers blanked the Seneca Valley Raiders on Tuesday night, 5-0, in a Section 3-AAAA clash. The NA victory knocked Seneca Valley from the ranks of the unbeaten and keeps the Tigers’ section title hopes very much alive.  The Lady Tigers improve to 10-2 overall and 7-2 in section play. The Raiders drop to 6-1 overall and in Section 3.

In their earlier meeting on March 28, Seneca Valley leaped in front of the Tigers with a five-run first inning en route to a 9-4 victory. In the rematch at NASH, the first inning had an ominous start when Beining hit leadoff batter Jess Neil.  Beining quickly regrouped and induced three prompt ground outs to leave Neil stranded at third base and keep SV off the scoreboard.

In the bottom of the first, NA’s Laura Cotter singled and was advanced to second on a sacrifice bunt by Liz Scherer. An out later, Mary Funderlich drove a Nikki Matz pitch over the right-centerfield fence for a 2-0 lead.  The homer was the fifth of the season for Funderlich and second against Matz in 2014.

Timely hitting by the Tigers in the third and fourth innings bolstered the NA advantage.  In the third, Beining helped her own cause with a two-out RBI double that scored Funderlich for a 3-0 lead. Cotter came through for a two-out RBI single in the fourth that scored Anna Sardon to bring the score to 4-0, Tigers.  Sardon finished with a 2 for 2 day and added a sacrifice bunt in the sixth.

While the Tigers used two-out base hits to expand their lead, Seneca Valley squandered base runners and opportunities to get back into the game.  In the top of the fourth with Aubrey Baehr at second base and two outs, Sarah Blagg laced a base hit off the diving glove of third baseman Funderlich that ricocheted toward second baseman Emily Hogan.  Rounding third, Baehr aggressively tried to score on the play but Hogan alertly threw home to catcher Casey Ginocchi who applied the tag of Baehr for the inning’s final out to keep Seneca Valley scoreless.

In the fifth, the Raiders had runners at second and third with nobody out but Beining and the NA defense once again buckled down.  Beining collected a lineout of Paige Foley and then induced a looping flare off the bat of Alyssa Branch on the infield. Hogan caught the fly ball from Branch and then doubled up courtesy runner Tori Pfab off of second base to end the inning and thwart the Seneca Valley threat.

North Allegheny capped the scoring in the sixth inning when Cotter singled home Olivia Schweiger to bring the score to its eventual final, 5-0. Beining silenced the Raiders for her fifth win of the year and punched out four batters while walking none.  For her efforts, Beining was named the Wright Automotive Player of the Game.

Winners of four in a row and six of their last seven, the Lady Tigers visit Hempfield this afternoon in a non-section affair. First pitch is scheduled for 4:00 pm.