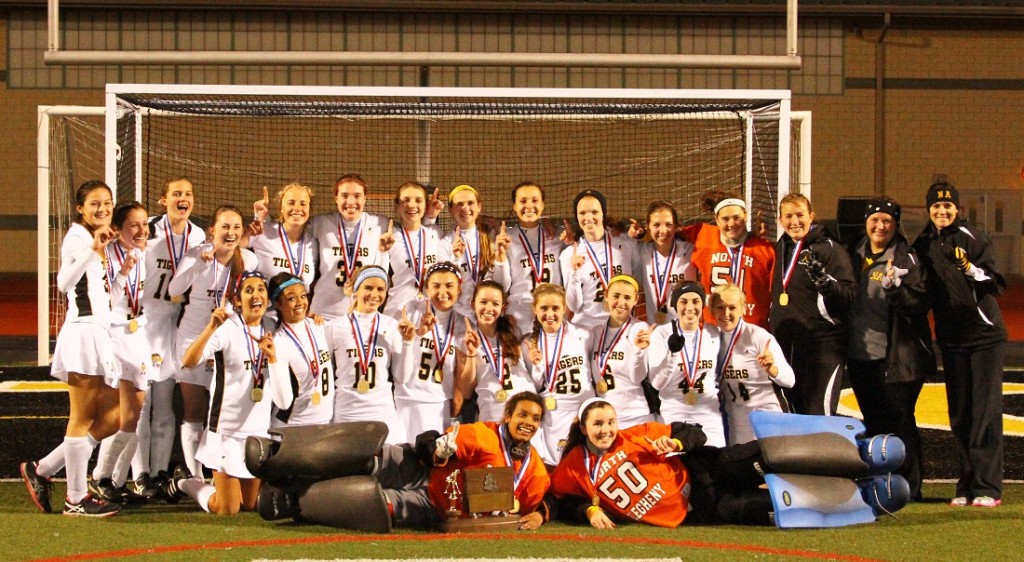 North Allegheny junior Jessie Brandon scored two goals to help the Lady Tigers top the Fox Chapel Foxes, 2-1, in the WPIAL Class AAA Field Hockey Championship on Tuesday night at Newman Stadium.  Last season, Fox Chapel ended North Allegheny’s season with a 1-0 win in the semifinals en route to a WPIAL title.  With revenge in mind, the Lady Tigers downed the reigning champions for their first WPIAL crown since 2010. In similar fashion, NA won the ’10 meeting with Fox Chapel in the title game by a 2-1 decision.

In Tuesday night’s rematch, Brandon gave North Allegheny the early edge with a tally with 9:33 on the first half clock to make the score 1-0, Tigers.  Brandon struck again 9:32 into the second half for a 2-0 Tigers lead, giving the NA forward 14 goals on the year.  Brandon’s second goal displayed the terrific speed of the NA junior as she raced past defenders for a ball in the clear and unleashed a cannonball into the Fox Chapel net from about 10-yards out. For her efforts, Brandon was named the Wright Automotive Player of the Game.

Twice in the game, once in the first and once in the second half, the Tigers appeared to have scored but had the goals waved off.  The first came early in the contest when Hannah Downing lifted a shot off a penalty corner over Fox Chapel goalie Hannah D’Cunha and into the net.  The problem, however, was that Downing’s shot never touched the low backboard behind the net on the first attempt from the penalty corner and the goal was disallowed.  Early in the second half and the Tigers leading 1-0 at the time, Kailey Vogl had a near-miss when she seemingly scored on the Fox Chapel door step, but a penalty corner had been awarded to NA by the officials prior to the Vogl’s shot and the goal was waved off.

Undaunted, the Tigers were not flustered and grabbed control of the game thanks to Brandon’s goals and the play of the NA forwards and midfielders.  Junior Megan Guzzardi, sophomore Maddy Snyder and junior Nicole Burns were among many who helped the Tigers maintain possession and hold a 2-0 pad deep into the second half.

However, the defending champs would not go away quietly as Fox Chapel converted a penalty corner into a goal by Nicole Susi, her team best 11th goal of the season, with 4:56 to play to trim the score to 2-1, Tigers.  North Allegheny held on in the remaining minutes to claim its 12th WPIAL Field Hockey title. The Tigers improve to 14-3-1 on the season and advance to the PIAA Play-in game on Thursday night against the District 6 champion, Mifflin County.  Fox Chapel’s season ends with a 12-5-1 record.