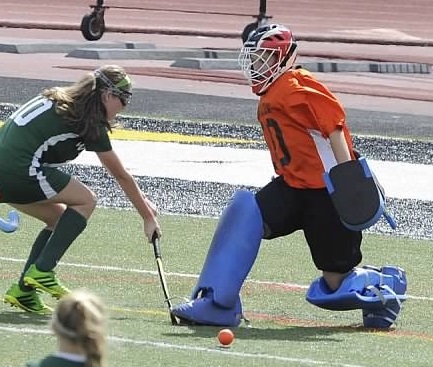 Lady Tigers Pounce on Wildcats in First “Out of Section” Win

In its fifth such contest, the North Allegheny Tigers field hockey team finally earned its first non-WPIAL section win with a 3-0 victory over the Novi Wildcats. The traveling team from Novi, Michigan provided excellent competition for the Tigers as NA heads into an important week in Section play.

The battered Tigers took to the field with 5 upper-class players being sidelined due to injuries. With the heat waving off of the turf on the temperate fall day, NA sprang into action with the first whistle. Buoyed by the support of the bench, the Tigers systematically worked their way into Wildcat territory. NA’s tri-fecta power players of Maddie Birmingham, Catie Kelly, and Jessie Serody continued to dictate the overall game. The teamwork and passing from these seniors set the tone for a game that saw countless break-aways and several scoring chances. At the 9:29 mark, Serody broke the 0-0 tie with a blistering shot from just outside the circle. The shot ricocheted off the pads of the Novi goalie and into the goal giving NA a 1-0 lead. NA’s right side proved their avenue of best attack with support provided by senior defender Olivia Krause as she pushed up on her tackles and picked the ball, pushing it up to Birmingham who then pressed the attack forward. As the half wore on, Novi began to find their stride and started to generate their own scoring opportunities. While both teams had been clearing their circles cleanly, Novi finally earned three penalty corners within a couple of minutes. All three attempts saw the NA defense hold strong and the half ended with NA leading 1-0. Shots on goal were NA – 3, Novi – 4; with Novi earning three penalty corners and NA playing a rare half without one penalty corner to its credit.

The second half would see an upsurge in end to end action. As the pendulum swung, during an NA attack, at 10:58, a scrum in front of the net ended in a smart and cool pass from junior Alyssa Hillenbrand to Serody, supporting the offense from the top of the circle. The back pass was buried by Serody into the left corner, for her second goal of the game. Novi jumpstarted their offense by a display of superior stick skills, with some of the hardest and most accurate drives that NA has seen this season. The fierce hits set up some heart stopping plays when the Novi forwards would break through the NA defense for a one on one with NA keeper Rena Israel. The junior goalie maintained the shutout as she determinedly came out from in front of the net to show down the opponent towards the top of the circle. Her uncompromising play foiled repeated efforts from the Wildcats, as she skillfully cleared several balls and her team had a chance to recover back. The final goal of the day came from another Hillenbrand set up. At 26:14, her nifty drop pass went to Birmingham this time, who seized the free space and swept the ball forcefully into the net. A flurry of North Allegheny pressure with minutes remaining resulted in two penalty corners with time expiring. The entire team pushed up for this final set play, but NA did not convert and the game ended with final score North Allegheny – 3, Novi – 0. Second half statistics measured NA Tigers – 4 penalty corners, 8 shots and the Novi Wildcats – 0 penalty corners and 6 shots.

NA faces section rival Pine Richland in a highly anticipated match Monday at Newman Stadium at 7:30 pm (JV at 6:00). The game will be broadcast live via the internet on the North Allegheny Sports Network.