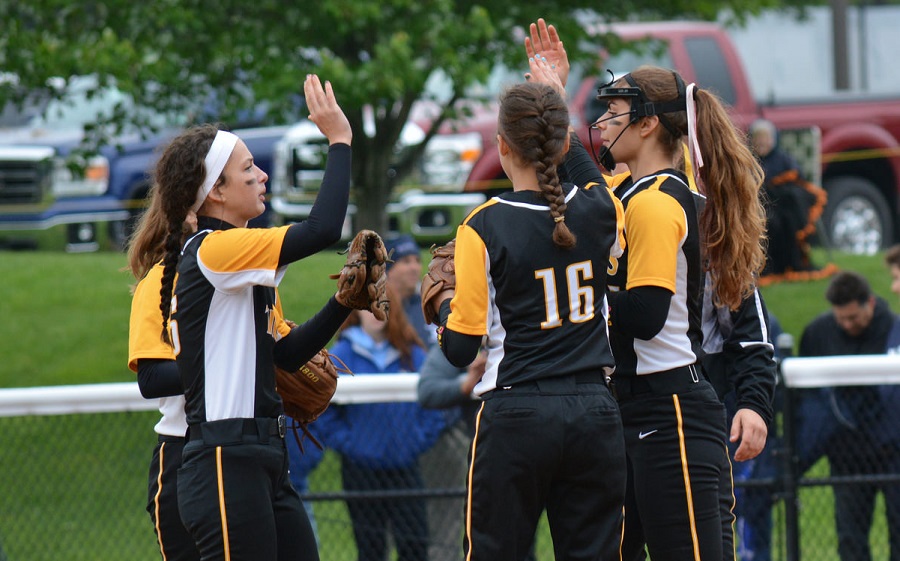 Lady Tigers Trip Up Trojans In PIAA First Round

The North Allegheny Tigers defeated Erie McDowell, 1-0, on a cold summer day in Erie on Monday in the first round of the PIAA playoffs.  The Tigers stranded eleven runners on base but were able to get one key hit to secure the victory. 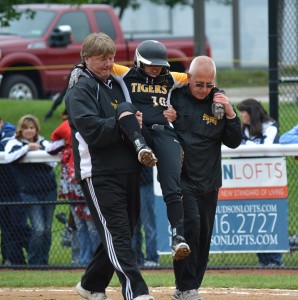 Emily Hogan being carried off the field by coach Warren Pirring and head coach Rick Meister.

The first inning brought some bad news for North Allegheny.  With one out and one on, Emily Hogan put down a successful bunt but twisted her ankle on first base and never returned.  There was no available update after the game.

The Tigers scored the game’s only run in the second inning.  Mackenzie Gostomski hit a slow roller to second base with the bases loaded and two out and beat the throw to first base for the only RBI of the game.  Gostomski tallied three hits and Logan Woodley added two hits.

Meanwhile, Madi Beining was on cruise control.  She fired a complete game one hitter, giving up only a one out double to Kourtney Baker in the fourth.  Beining also struck out 14 batters on the day and was never seriously challenged.  With her performance Beining was named the Wright Automotive player of the game.

The Tigers will now have a rematch with the Hempfield Spartans on Thursday afternoon in the second round of the PIAA playoffs.  You will be able to listen to the game live on the North Allegheny Sports Network.