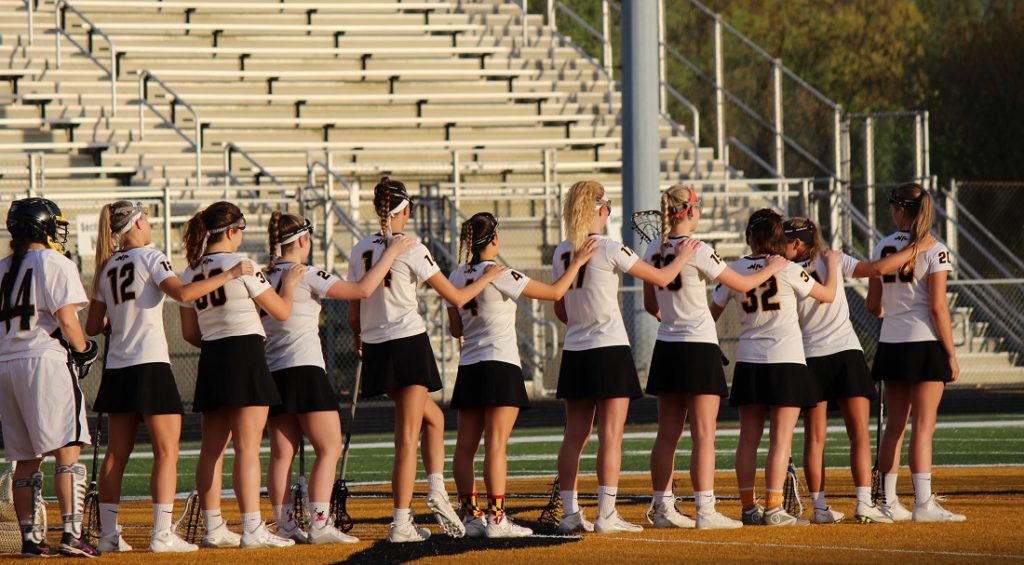 Thursday night’s game featured an intriguing matchup between North Allegheny head coach Harry Datz and one of his former players, Annie (Succop) Tigano. Tigano, in her second stint as Butler’s head coach, played for Datz at Shady Side Academy (Class of 2001) and went on to play collegiate lacrosse at Lehigh University.

Datz’s Tigers wasted little time against Tigano’s Tornado and scored on a Ferringer goal just 14 seconds into the game for a 1-0 lead. The Golden Tornado were unfazed by the opening jab by the Tigers and counterpunched with four straight goals. Junior Karolyn Miller scored Butler’s first two goals, followed by Kate Quinlan and Taryn Thompson for a 4-1 lead with 19:06 remaining in the first half.

While Butler held the early advantage, North Allegheny rattled off nine straight goals to take a stranglehold of the game. Val Davis, Skye DePrado, Nicole Atkinson and Ferringer scored four in a row for a 5-4 lead with 3:46 left in the first half. Freshman Katie Oates scored back-to-back goals to improve the NA advantage to 7-4. Atkinson tacked on another goal, followed by back-to-back goals from junior Lexi McClure to balloon the Tigers lead to 10-4 by halftime.

The Tigers and Tornado exchanged goals in the second half as NA held off Butler for a 15-10 triumph. Ferringer added two more goals, while Atkinson, Paige Jones and Ryley McClellan chipped in with second-half goals to secure the win. Finishing with three goals and 11 wins on draw control, Nicole Atkinson was selected as the Wright Automotive Player of the Game.

Butler was paced by Miller’s five goals. Junior Eliza Drohan totaled two goals in the second half for the GT’s. Sophomore goalie Morgan Sellers took the loss but played well in between the pipes, making 18 saves.

With the win, North Allegheny improves to 2-1 overall and in section play. Butler remains winless at 0-4 overall and 0-3 in Section 3-AAA. The Lady Tigers return to action with a section matchup against Sewickley Academy at home on Monday at 4:30 p.m.