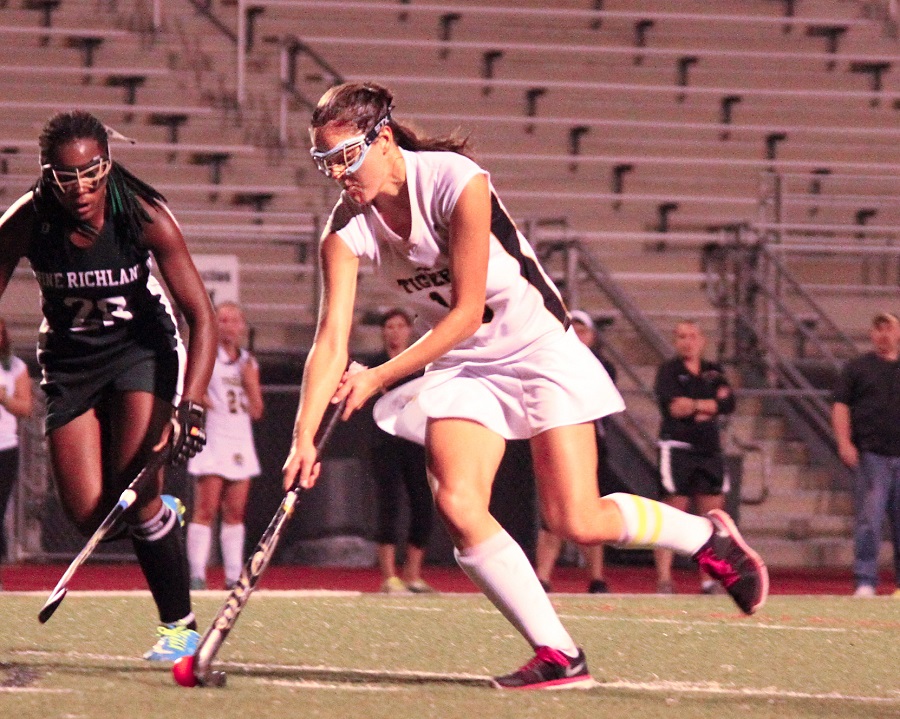 The last time North Allegheny faced Pine-Richland the Tigers defeated the Rams, 4-0, in the Class AAA WPIAL Championship Game at Newman Stadium. In that contest, NA’s Maddy Snyder tallied a hat trick that buried Pine-Richland and propelled the Tigers to WPIAL gold. In a regular season game with first place in Section 1-AAA at stake on Monday night, the teams and the venue were the same and so were the results as North Allegheny used three Snyder goals to best Pine-Richland, 4-2. For her efforts, Snyder was named the Wright Automotive Player of the Game by the North Allegheny Sports Network.

Entering last night’s game, Snyder had scored just one goal in the first eight games of the season. However, Snyder opened the scoring against Pine-Richland with an unassisted goal with 12:20 remaining the first half for a 1-0 lead. The neighborhood-rival Rams would not go away without a fight and tied the game less than four minutes later when sophomore Molly Rottinghaus found sophomore Sarah Metzmaier for a goal and the game was evened, 1-1.

In a crucial sequence near the end of the first half, Rottinghaus was streaking up the right sideline before she was cut off by senior Catie Kelly to give North Allegheny possession at midfield with less than a minute before intermission. The hustling play by Kelly proved pivotal as moments later Brooke Cameron passed to Snyder with 22 seconds left in the half for her second goal of the game and a 2-1 Tigers lead.

Snyder deflated the Rams even further at 17:15 of the second half when she deflected in a pass from senior Jessie Serody for a 3-1 lead. Senior Maddie Birmingham put the game away with a marker just over a minute later to bring the score to 4-1, Tigers. Freshman Bridget Russell assisted on the Birmingham goal.

Despite a hefty deficit, Pine-Richland refused to pack it in and netted the last goal of the night when Vivian Cavanaugh scored on a terrific pass from Brenna Flynn to bring the game to its eventual final, 4-2, North Allegheny.

The Tigers leap to 5-4 overall and 4-0 in Section 1-AAA with the win. Pine-Richland slips to 6-2-1 overall and 3-2 in section play. North Allegheny hosts Latrobe on Thursday night in a game that will be broadcast live via the internet on the North Allegheny Sports Network. Game time is slated at 7:00 pm.