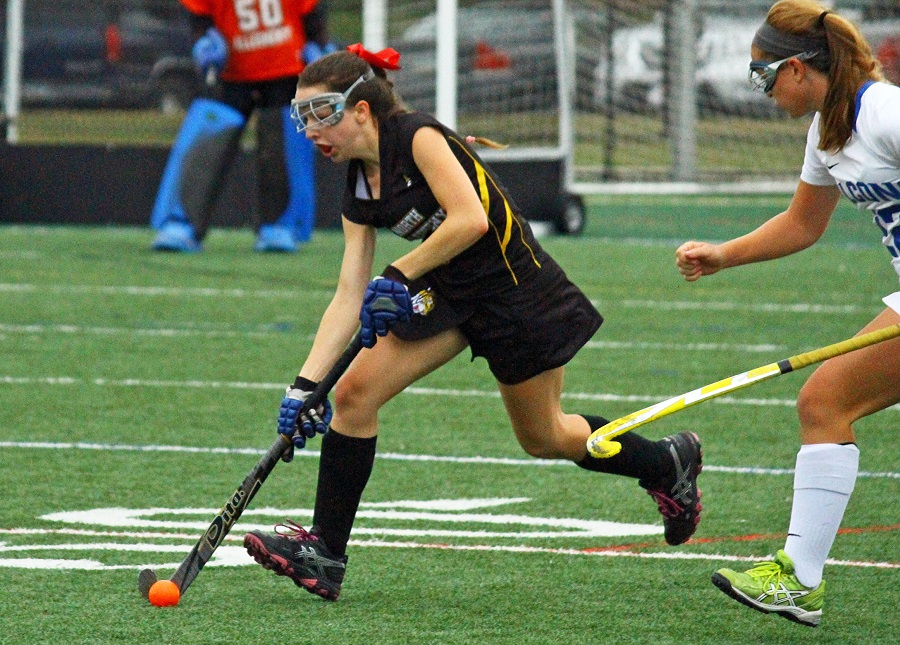 The Lady Tigers took to the road on Saturday for their second consecutive weekend tournament, meeting two Central Pennsylvania teams in the hotbed of field hockey.  Looking to test themselves against the best of the best, North Allegheny faced off first against the 2012 State Champions, the Lower Dauphin Falcons, coming up on the short end in a match that ended 10-0.  The Falcons exhibited skill, speed and tenacity throughout the rain-soaked day, winning their home tournament by handily defeating both of their opponents, demonstrating how they were able to rise to the top in the state.  The Falcons have five State Championships under the current coaching staff.

Playing their fifth and sixth away games in eight days proved to have taken its toll on a road-weary Tiger team, though their effort on the field was honorable and consistent despite playing throughout most of the day in an absolute downpour.  The Falcons flew in and took control just 55 seconds into the match, relentlessly pressing into the NA defensive zone throughout the contest.  Lower Dauphin would repeatedly break up NA’s momentum with their quick, aggressive style of play at midfield, rapidly picking up loose balls and defending their possession down the alleys, allowing the Tigers just one penalty corner in the game and giving up no shots on goal.  North Allegheny’s goalies, senior Morgan Mendenhall and junior Isley Smith were tested time and again, as Lower Dauphin swept down the field, showing exceptional dribbling, passing and shooting skills.  Both Mendenhall and Smith made spectacular saves throughout the contest, combining for 10 registered saves on the day.  The contest would end with Lower Dauphin on top 10-0.

The toll of the Tigers’ most difficult week of the season was evident by the end of the second and final game of the tournament, when the Lady Tigers faced a more closely matched team in the Cumberland Valley Eagles.  The Tigers would exhibit stronger defense and create more opportunities offensively, though coming up a little short against another aggressive bird of prey, as the Eagles cruised to a 3-1 win.  With the Eagles up 2-0, the highlight of the contest for NA would come at the 3-minute mark of the second half, when the Tigers would pull to within one goal, following a penalty corner in the Eagles defensive end.  Sophomore Catie Kelly would receive the insert pass from junior Kailey Vogl, taking a quick shot that was blocked before Vogl picked up the loose ball and pushed it past the Eagle goalie.  The goal sparked rejuvenation on the Tiger bench, although it was not enough to create a full comeback.   The game would conclude with NA goalies Smith and Mendenhall registering another eight saves.  The Tigers would be helped defensively throughout the day by a strong showing from junior Kendra Downey.

Still undefeated in Section 1, the Tigers regroup for a Tuesday contest against the only section team they have yet to face, Pine Richland Rams.  With the Rams having beaten Penn Trafford on Friday evening, NA’s Tuesday home match will be a battle for the top spot in the section, and is set for 7:30 (6:15 jv) at Newman Stadium.