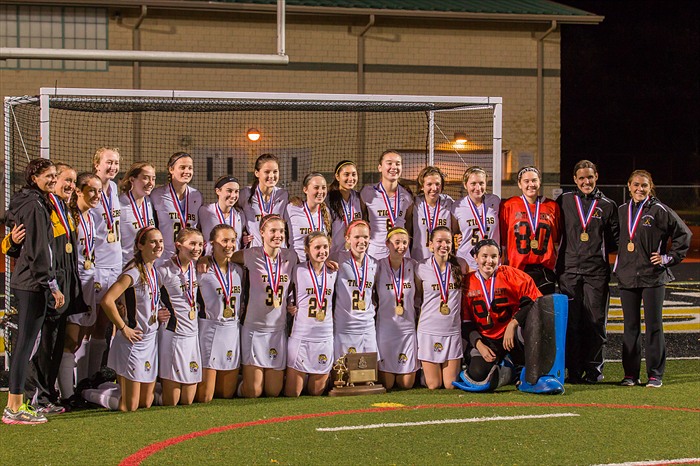 Junior forward Maddy Snyder netted a hat trick and provided North Allegheny with more than enough offense as the Tigers blanked rival Pine-Richland, 4-0, for a second straight WPIAL Class AAA championship.  The Tigers defeated the Rams twice in the regular season and completed the sweep of their Section 1 foe on Tuesday night for their 13th WPIAL title.

Snyder opened the scoring at the 8:04 mark of the first half to give the Tigers a 1-0 lead. Less than 10 minutes later, North Allegheny struck again on a marker from Jessica Brandon, her team-best 23rd goal of the season, to push the score to 2-0, Tigers. Brandon’s goal came on a penalty corner, one of eight on the night for the Tigers, and was assisted by Nicole Burns. It was Brandon who assisted on Snyder’s next goal with 5:48 left before halftime to send NA into intermission with a 3-0 lead.

Snyder delivered the back breaker to the Rams just 1:39 into the second half for her third goal of the night to bring the final score to 4-0, North Allegheny. The hat trick for Snyder in the WPIAL championship gives her 18 goals on the season and made her an easy choice for the Wright Automotive Player of the Game.

The 4-0 triumph over Pine-Richland gave the Tigers their 14th shutout of the season and seventh win in a row ahead of the PIAA playoffs.  North Allegheny improves to 17-3 overall and hopes to win its first ever PIAA playoff game next Tuesday night against the third place finisher from District 3, either Penn Manor or Cumberland Valley. Pine-Richland’s season ends with a record of 12-4.