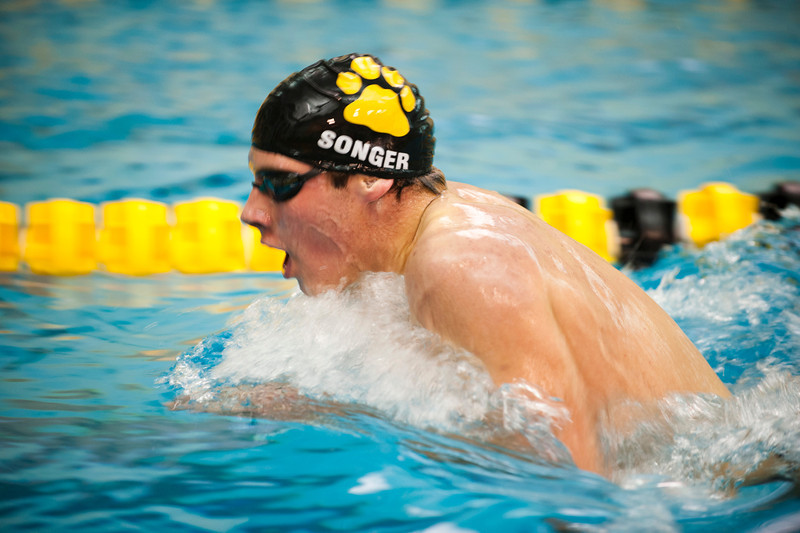 Both the Girls and Boys teams began the competition with NASH Pool record-breaking performances in the 200 Yard Medley Relay events.  The Tiger Girls quartet of Junior Jacquelyn Du, Junior Morgan Soulia, Junior Kayla Churman, and Freshman Lauren McGrath raced to a record setting time of 1:45.57.  Not to be outdone, the NA Boys immediately followed with their own new NASH Pool standard of 1:33.56 swum by the team of Senior Zachary Buerger, Junior Casey Melzer, Junior Greg Arnold, and Sophomore Daniel Songer.

The NA Divers had a solid evening of competition as well, with the Girls trio of Junior Julia Vespoli, Freshman Madeline Mianzo, and Freshman Michaela Abbs completing a 1-2-3 finish.  The NA Boys Divers had Junior Andrew Doerfler winning the night’s competition, while Sophomore Jared Ziegler finished in second place while also gaining a spot in the WPIAL Diving competition to be held at North Allegheny later in the season.

Continuing the record setting night of swims for the NA Boys team, Buerger also established new NASH Pool standards in both the 50 Yard and 100 Yard Freestyle distances.  He finished the 50 Freestyle event with a time of 20.76 seconds which is also a new NA team record.  Buerger later covered the 100 Yard Freestyle distance in a time of 45.76 seconds as the lead-off swimmer for the NA Boys 400 Yard Freestyle Relay.  Buerger also set a new NA team record in the Boys 100 Yard Backstroke event, swimming to a time of 48.33 seconds.  Melzer was also an individual standout for the NA Boys as he crushed both the NA team and NASH Pool records for the Boys 100 Yard Breaststroke with an event winning time of 56.88 seconds.

The Tigers will take some time off from competition over the holidays until Thursday, January 2nd when they visit Seneca Valley @ 6:00 PM to begin WPIAL AAA Section 2 competition.