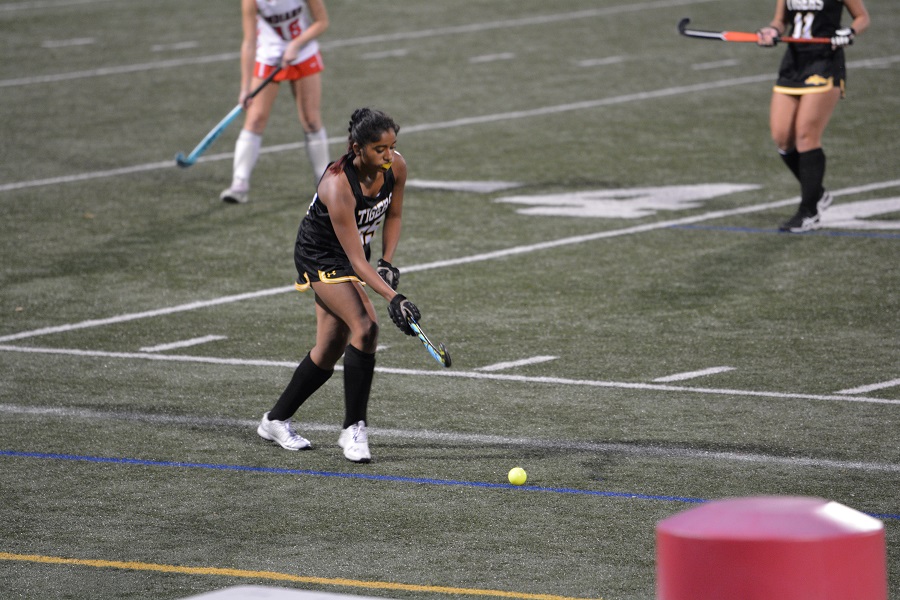 NA Bows Out With Semifinal Loss to Peters Township, 1-0

Ever since field hockey became an officially sanctioned sport by the WPIAL in 1994, the North Allegheny Tigers have qualified for the district playoffs every year. Appearing in the postseason once again, the Tigers began their quest for a 14th WPIAL crown on Wednesday night with a visit to Peters Township in the WPIAL semifinals. The host Indians threw up a road block, however, and Peters Township defeated NA, 1-0.

Entering the postseason, the North Allegheny defense and sophomore goalie Jordan Ashbaugh had posted shutouts in four of the last five games. Peters Township challenged the NA net throughout most of the first half and senior Cassidy King had three golden opportunities, but was turned away each time by the Tigers. With 14:19 to play in the second quarter, one of King’s best scoring opportunities was a hard shot from just inside the circle on the right wing but Ashbaugh delivered a kick save to keep the game scoreless. Ashbaugh made a total of four saves on the night.

With the game still deadlocked coming out of halftime, Peters Township hit an extra gear in the third quarter and the Indians’ pressure paid off with a goal by junior Sofia Forlini with 12:04 on the clock for a 1-0 lead. The goal was Forlini’s third against North Allegheny this season. She had a pair of goals in a season opening 3-2 win over the Tigers as well.

Peters Township dictated the pace of play for most of the game, but North Allegheny did show glimpses of its offensive prowess and manufactured two shots on net. Down to the final minute in the fourth quarter, the Tigers made one final push up field. An alert play by senior Supritha Challa in the waning seconds to drive the ball into the circle drew a penalty corner with no time remaining. Since a game cannot end on a penalty corner, the Tigers had their chance to tie the game but the Peters Township defense fended off NA and held on for the 1-0 win.

With the heads up play of Challa, as well as strong midfield play of senior Ashley Loftis, Challa and Loftis were selected as the Wright Automotive Players of the Game by the North Allegheny Sports Network.

The loss ends North Allegheny’s season with an 8-5-1 record. Peters Township improves to 10-3-1 on the campaign and advances to the WPIAL championship game for the third year in a row. The Indians will face the reigning champion Pine-Richland Rams next week.

Congrats to head coach Michelle Couch and the entire Tigers team for another great season.