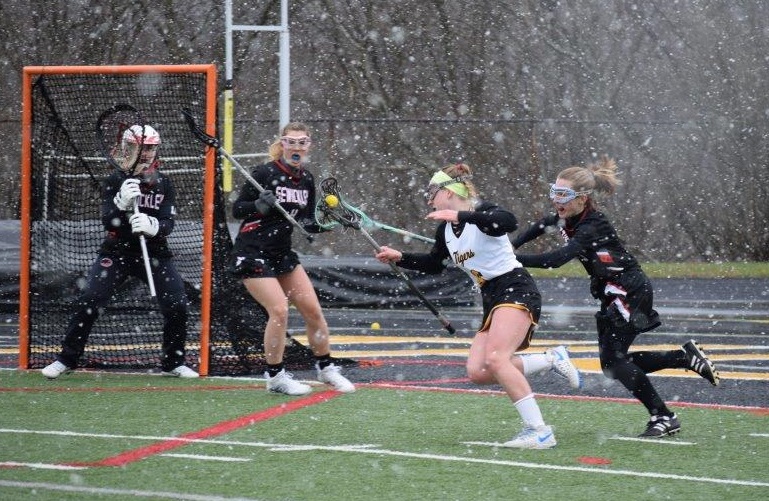 The first half was a seesaw affair with five lead changes. North Allegheny erased an early 1-0 deficit with back-to-back goals from Ryley McClellan and Brooke Ferringer for a 2-1 lead. The Panthers rattled off four straight goals for a 5-2 lead with 14:54 remaining in the first half before the Tigers responded yet again.

North Allegheny netted four consecutive goals, two each from Jones and Ferringer, for a 6-5 lead with 8:55 to play in the half. However, the Panthers finished strong to close out the first half, tallying five straight goals for a 10-6 lead at intermission.

The Tigers mounted a comeback in the second half and trimmed the deficit to 14-13 with 5:58 remaining in the game. North Allegheny appeared to have tied the game on two separate occasions but two apparent goals by Ferringer were waived off by penalties. The Panthers scratched and clawed their way to the finish line in the waning minutes and held on for a one-goal victory.

Along with Jones, Ferringer also finished with four goals to pace the NA attack and spearheaded the comeback bid in the second half. McClellan notched a hat trick and junior Lexi McClure posted two goals and six groundballs. Freshman Katie Oates had a goal and three groundballs.

Junior Nicole Atkinson teamed up with her wings for 14 draw control wins on 21 attempts and scooped up three groundballs. Junior goalie Becca Wickett made 11 saves in net.

North Allegheny dips to 2-2 in Section 3-AAA action following the loss. Sewickley Academy improves to 4-1 in section play. The Tigers will host Seneca Valley on Wednesday night in a game that can be heard live via the internet on the North Allegheny Sports Network. Start time is slated for 7:30 p.m.