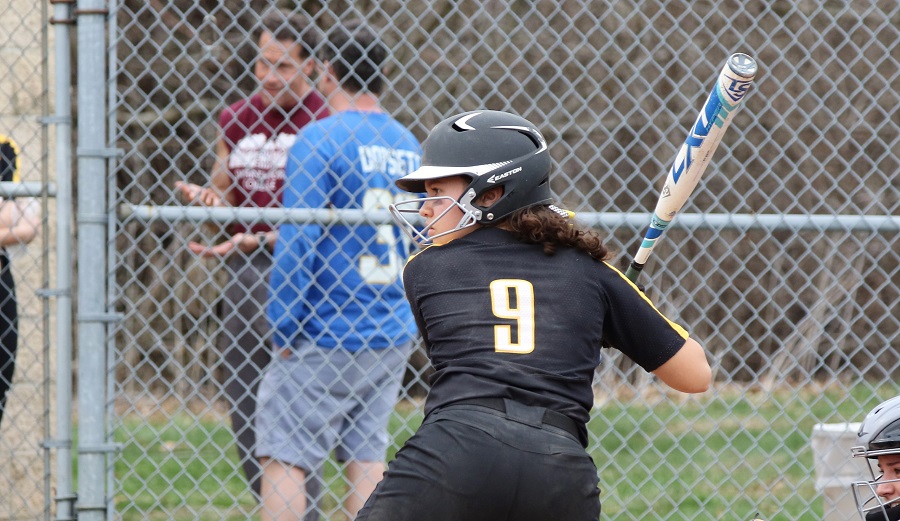 The North Allegheny softball team remained undefeated in Section 3-6A play with a 3-2 victory over the Shaler Titans on Saturday evening. The win was NA’s second of the day as the Tigers also outslugged South Park in a non-section contest earlier on, 17-16.

Against Shaler, the Lady Tigers received a complete-game effort from starting pitcher Ashley Adams who struck out five batters and walked only one to earn the victory. At the plate, Adams was 2 for 2 with a walk and one RBI. Shaler reliever Hunter Gray took the loss, permitting two runs in 2.2 innings.

The visiting Titans scored the first run of the game in the top of the first inning on an RBI single from Victoria Grayson for a 1-0 lead. North Allegheny knotted the score at 1-1 in the bottom of the third inning thanks to a bases-loaded walk by Adams that scored Anna Pilotta from third base.

In the bottom of the fourth inning, North Allegheny senior Shannon Hamm started the frame with a single and advanced to second on a sacrifice bunt by Brooke Serbin. One out later, freshman Lauren Haywood gave the Tigers the lead with a clutch two-out RBI single for a 2-1 advantage.  An error on the play allowed Haywood to advance to third base and she soon trotted home on an RBI double courtesy of junior Regan Brodine for a 3-1 lead. Finishing with a 2 for 2 performance, an RBI, a run scored and two successful sacrifice bunts, Haywood was selected as the Wright Automotive Player of the Game.

Shaler made things a bit tighter in the sixth inning with an RBI single from Maizi Wohlgemuth that trimmed the score to 3-2, Tigers. The Titans had a chance to tie the game later in the inning with runners at second and third and two outs, but Adams shut the door on Shaler with a strikeout of Skyler Tortorea to end the threat.

In the seventh, Adams retired the Titans in order to close out a 3-2 victory for North Allegheny.

With the doubleheader sweep, North Allegheny vaults to 6-3 overall and 4-0 in Section 3-6A. The Tigers are slated to host Latrobe on Monday at 7:00 p.m.