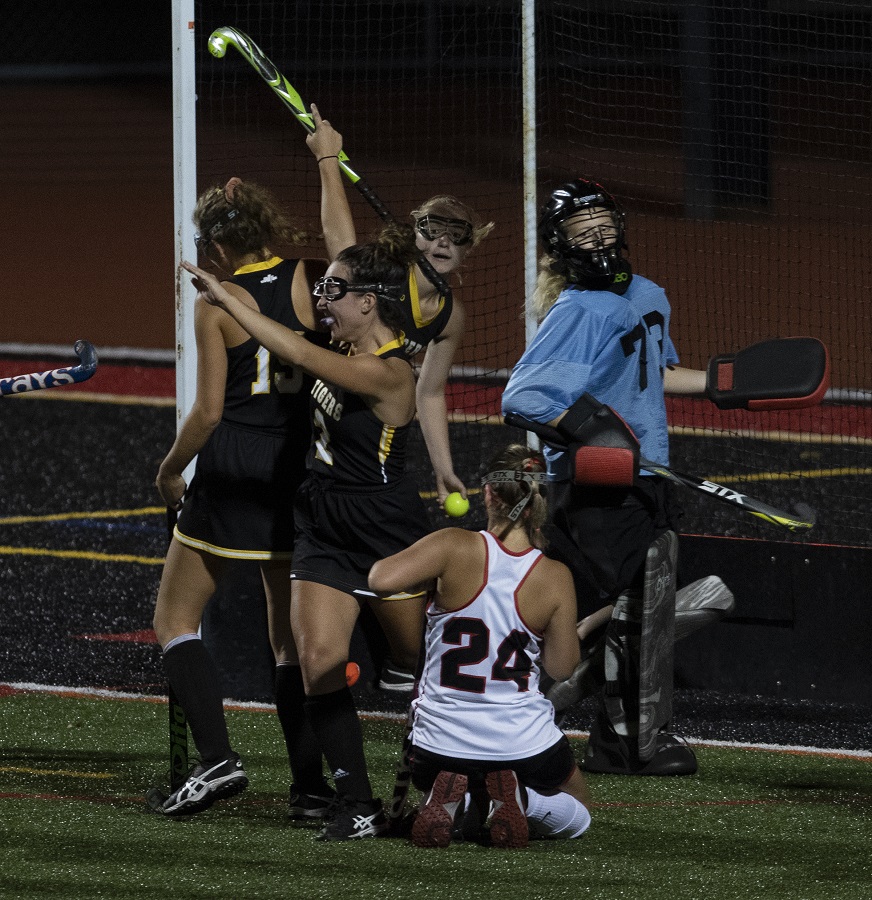 North Allegheny started fast and finished strong for a 4-0 win at Fox Chapel in a WPIAL Division 1 contest. In a matchup between perennial playoff contenders, the Tigers earned an important victory in the standings over a familiar foe.

Fox Chapel had won five of the last six games against North Allegheny entering Wednesday night’s contest, but the Tigers used their team speed and success on penalty corners to turn the tables on the Foxes.

North Allegheny cashed in on 3 of 9 penalty corners on the evening, the first of those goals coming with 18:25 to play in the first half. Off the corner, senior Hailey Wachowiak centered a pass in front to junior Marisa Hess, who deflected the ball into the net for a 1-0 NA lead.

Just 1:55 later, Wachowiak turned on the jets to beat the Fox Chapel defense and then sent a pass in front to freshman Sofia Mianzo, who made a terrific deke move on the Foxes netminder for a goal and a 2-0 lead. Setting up numerous penalty corners because of her speed, and assisting on two goals, Wachowiak was named the Wright Automotive Player of the Game by the North Allegheny Sports Network.

Late in the first half, the Tigers had one more penalty corner opportunity and capitalized thanks to another goal by Hess with just five seconds before intermission. The goal by Hess, which was assisted by Ella Strzempek, was her team-best seventh of the season and increased the lead to 3-0, Tigers.

Thanks to the defense of Maya DeNoma, Ally Barcaskey and Maria Duchi, the Foxes had very few good scoring opportunities. Fox Chapel’s Kelly Powell had perhaps the best chances of the game with 16:30 and 8:00 remaining but missed wide right on both shot attempts.

North Allegheny put the finishing touches on the win with another penalty corner goal, this time by senior Kate Adams with 6:03 remaining to close out a 4-0 triumph.

Freshman goalie Jordan Ashbaugh made three saves to earn the victory as NA posted its second shutout of the season and second straight against a division opponent.

With the win, North Allegheny improves to 3-7-1 overall and 3-1 in WPIAL Division 1. Fox Chapel slips to 3-6 overall and 1-3 in the division. The Tigers will take on Forbes Road in a non-section contest at Hempfield High School in Greensburg.