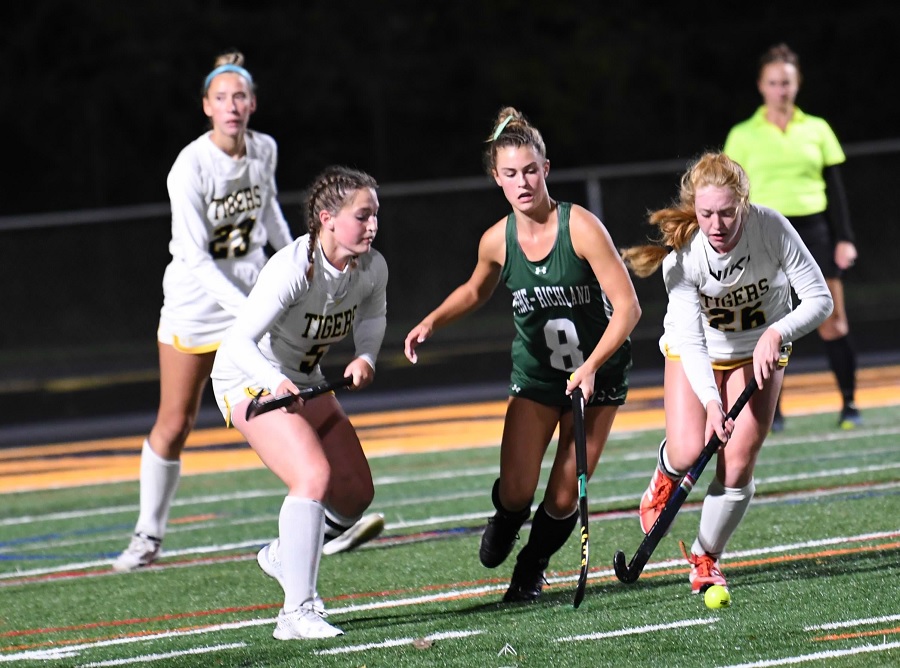 NA Falls to Pine-Richland in Overtime, 2-1

Two of the top programs in the WPIAL and the top teams in 3A Section 1 met at Newman Stadium and the game did not disappoint, as Pine-Richland took advantage of a penalty stroke opportunity in overtime to defeat North Allegheny 2-1.

Both teams were riding hot streaks into the contest, as the Tigers were (8-0-1) in their last nine games, while the Rams had a nine-game winning streak.

North Allegheny started strong, getting the first two penalty corners of the game and a couple of shots, but they could not beat Sara Neuhart.

The next ten penalty corners would favor Pine-Richland as would the game’s first goal.

Sophomore Georgia Rottinghaus fired a strong chip from 14-yards out that found it’s way underneath the crossbar to give the Rams a 1-0 lead with :55 left in the first quarter.

It would stay that way despite constant pressure from Pine-Richland to start the second half. The Rams forced five penalty corners and had four shots on goal early in the third quarter, but the Tigers defense and goalie Jordan Ashbaugh withstood the barrage.

That allowed the Tigers a chance to tie the game, and they did so with 10:31 left in the third quarter. Isla Abrams broke down the right side and threw a shot towards the goal that caromed of a Rams defender’s stick and into the net to tie the score at 1-1.

North Allegheny applied great pressure late, getting 4 penalty corners and two shots, but the game remained tied as it headed to overtime.

Pine-Richland took the center pass to start the 7 v. 7 overtime and immediately attacked the North Allegheny goal. The Tigers were whistled for a penalty in the shooting circle which resulted in a penalty stroke for Jessica Albertson. The junior made no mistake, whistling a hard flick high inside the near post just 1:21 into overtime giving the Rams the 2-1 win.

Junior Isla Abrams, who scored her 15th goal of the season and created several opportunities with her speed was awarded the Wright Automotive Player of the Game.

North Allegheny starts the second half in 3A Section 1 by hosting Mt. Lebanon Friday night at Newman Stadium.