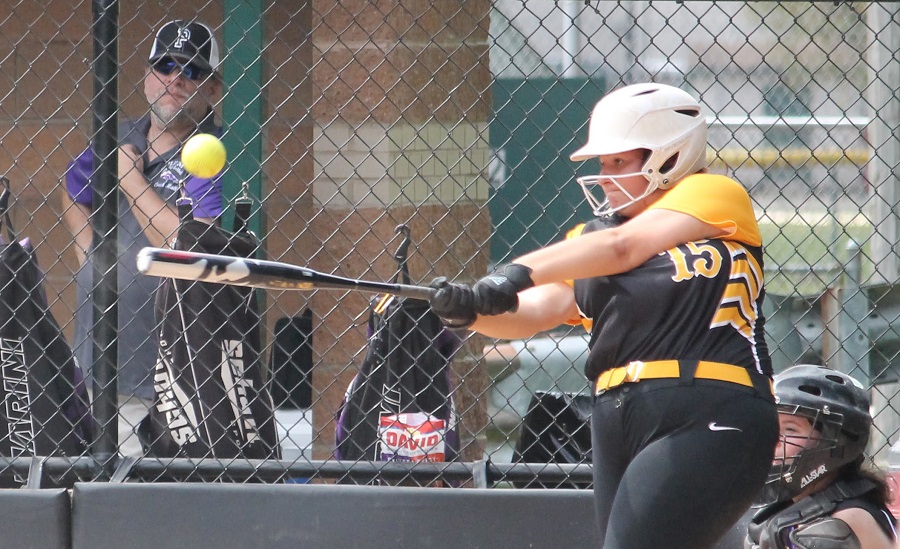 NA Falls To Plum In Doubleheader

In two heartbreaking games, NA lost to Plum, a consistently tough opponent, 11-1 and 14-6 on Sunday afternoon.

Game one started out rocky, as the Tigers were held at zero heading into the bottom of the first. Plum pummeled the Tigers, earning seven runs.  The Tigers eventually stopped Plum as pitcher Emily Yanchak (sophomore) snagged a grounder, tossing it to shortstop Lizzie Wetmore (junior) at second for an out.  This was followed by a flyout by Madison Klinefelter (junior) in left center and then finally a tag-out at third by Kenna White (senior).

In the top of the second inning, Plum, again, held the Tigers at zero, but defensively, at the bottom of the second inning, the Tigers pulled themselves together.  Although one run snuck in, the girls played tough. Yanchak stopped another grounder, throwing to Wetmore at second for the out. Katie Marangoni (junior) at first stopped a fast-moving rip down the line for another out, and Abby Birch (senior) snagged a fly on the run in right center.

The top of the third was much of the same with nothing getting by Plum’s impenetrable defense.  This time, though, in the bottom of the third, the Tigers were impenetrable, too. Klinefelter grabbed a beautiful flyout in left center. Wetmore stopped a tough grounder deep in the pocket and rocketed it over to Marangoni at first for the out. Then, Wetmore blocked one more grounder, this time tossing it to Megan Quinlan (sophomore) at second, ending the inning with Plum held from scoring.

Finally, at the top of the fourth, Wetmore sent a ball sailing far over the left fielder’s head, earning a much-needed triple and giving the Tigers some momentum. Marangoni followed Wetmore with a beautiful shot right in the hole, earning the only RBI of the game. Unfortunately, that was all Plum would allow that game.  In the bottom of the fourth, Plum gained two more. Wetmore and White each snagged one more flyout and Wetmore also stopped a grounder, sending it to Marangoni at first for the final out for the Tigers.

Unfortunately, game two started in much the same way with Plum hitting every hole and scoring six runs. Wetmore stopped a tough grounder up the middle, wailing it over to Marangoni at first for the first out.  White ran deep behind third to snag a foul for the second out, and Birch nabbed a flyout in right center, ending the first inning. In the bottom of the first, the Tigers could get nothing by Plum, ending the first inning 6-0.

In the top of the second, the defense was strong, allowing one run, but playing tough.  Wetmore snatched a line drive, and Yanchak, now in right field, caught a fly on the run.  At just the right moment, Quinlan stopped Plum from scoring, chucking the ball to Audrey Laswell (sophomore) at home for an out.  After a great first half of the inning defensively, again, Plum kept NA at zero.

In the top of the third, Wetmore grabbed the first two outs, and White took care of the third out. Feeling some optimism in the bottom of the third, Evelyn Wiethorn (sophomore) killed the ball, earning a triple.  Yanchak followed with a grounder, getting out at first, but earning an RBI as Wiethorn slid safely into home.

Heading into the fourth, Quinlan caught a fly on the run behind second base keeping Plum on their toes. After a missed chance for an out at first, the runner on second took off for third, but Marangoni stopped them with a beautiful throw to White at third, tagging the girl out for the second out of the inning.  Wetmore put an end to the inning with stopping another grounder and tossing it to Quinlan at second.

In the top of the fifth, Yanchak snagged another fly to right for the out.  White stopped a grounder at third, sending it to Quinlan at second for the second out of the inning.  Plum nabbed two more runs, but White had had enough of that inning, and ran hard to catch a pop-up far behind third.  Up at bat, Wetmore hit a double, followed by Marangoni, who again sent Wetmore home for an RBI.

In the sixth inning, Plum couldn’t gain an inch.  Wetmore secured another out with Marangoni, followed by Quinlan to Marangoni for the second out.  Wiethorn ended the inning after stopping a grounder and tossing it White at third for the tag. In the second half of the sixth, heading up to bat, Laswell hit a single, and was waiting for a ride home when Birch stepped into the box.  Birch sent the ball flying over the outfielders’ heads, earning a triple and an RBI. White, up to bat next, got a hold of one, earning a double and another RBI.

Starting the seventh, Wetmore snagged another line drive for the first out, but Plum’s hitting was again too much for the Tigers as Plum ran in four more runs.  Birch ended the inning, catching two more fly balls in right center. With their last chance up at bat, Klinefelter got things started with a single, and Wiethorn brought her home with a beautiful home run deep into left center field.  Unfortunately, it wasn’t enough. The Tigers lost game two, 14-6.