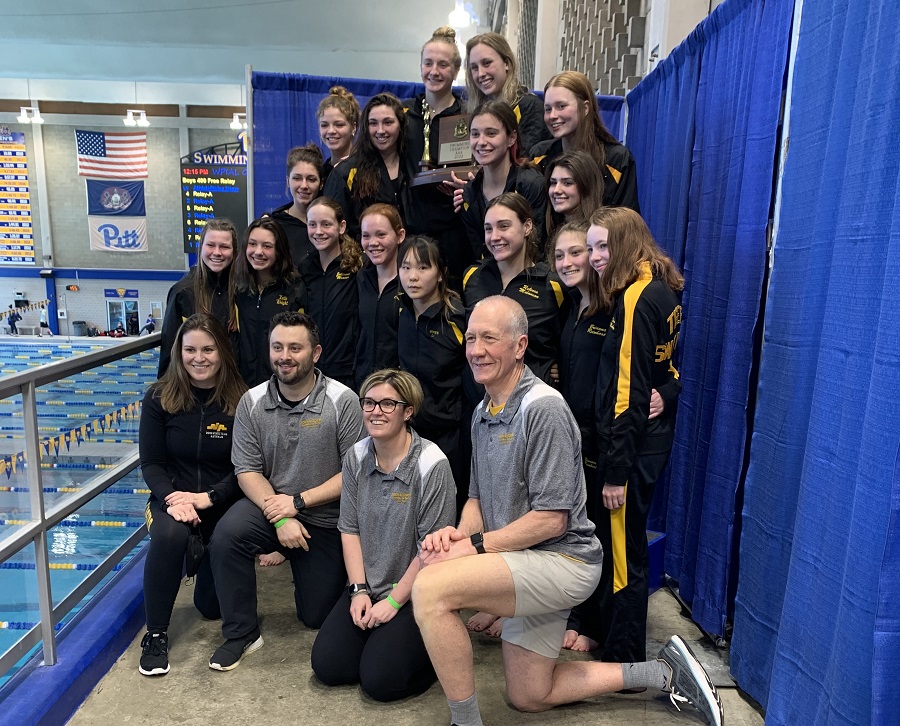 The North Allegheny girls’ swimming and diving team won a record 14th WPIAL title on Friday at the WPIAL Class AAA championships at Trees Pool at the University of Pittsburgh. It’s the most consecutive WPIAL championships by any girls’ team in any sport. The Lady Tigers took the title with a team score of 344, which was 30 points better than second-place Fox Chapel. The North Allegheny boys’ team took third place with a team score of 241. Seneca Valley won the WPIAL Class AAA boys’ crown.

In day two of the WPIAL Class AAA championship, the Lady Tigers were spurred on by two gold medal finishes and a new team record. In the 100 Breaststroke, sophomore Natalie Sens took first place and set a new school record with a time of 1:03.15. Junior Lexi Sundgren also won WPIAL gold in the 500 Free, clocking in at 4:51.89.

Winning silver in the 400 Free Relay was the quartet of Sundgren, sophomore Greta Mott, senior Isabella Dietz and junior Delaney Kennedy with a time of 3:30.14. Mott also took sixth place in the 100 Backstroke and junior Rebecca Melanson gave the NA point total a boost with a fouth-place showing in the 100 Free. For a look at all scores from day two of the WPIAL Class AAA girls’ competition, click here.

The North Allegheny boys’ squad was also impressive with a third-place performance. In day two, the Tigers were paced by sophomore William Gao, who won WPIAL bronze in the 100 Backstroke with a time of 50.69.

Other strong performances were provided by senior Stewart Messer in the 100 Breaststroke and junior Ben Gavran in the 100 Free, earning sixth and seventh-place showings, respectively. The combo of junior Zachary Jubeck, Gavran, junior David Shi and junior Eliot Maravich took seventh place in the 400 Free Relay. For a look at all scores from day two of the WPIAL Class AAA boys’ competition, click here.

Up next for North Allegheny is the PIAA swimming and diving championships at Bucknell University on March 16 and 17.