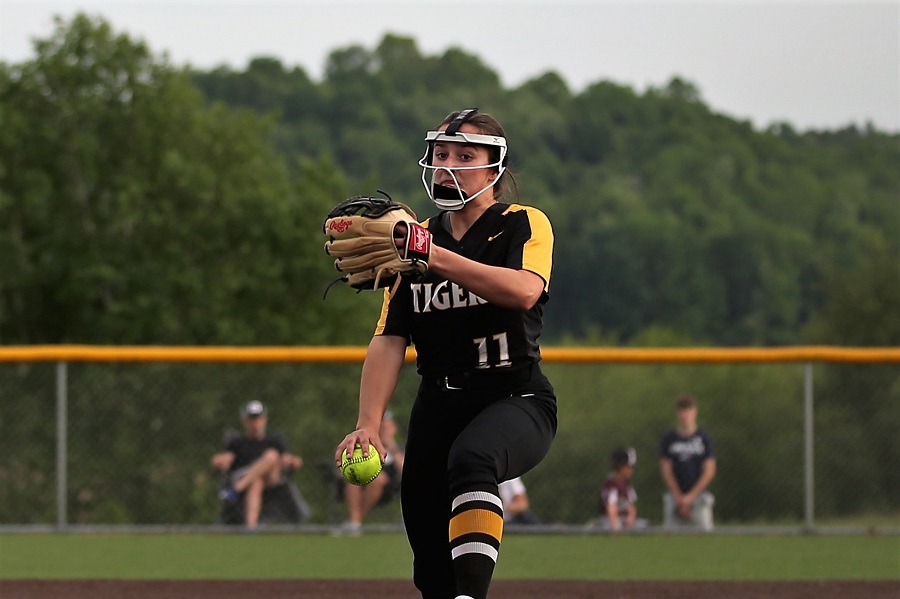 Sophomore Anne Melle drove in three runs and tossed a complete game three-hitter to help propel North Allegheny to a 5-1 victory over section rival Pine-Richland in the WPIAL Class 6A semifinals on Wednesday evening at Mars High School. Matching up against Boston College commit Gabriella Aughton, Melle outdueled her pitching opponent and limited the third-seeded Rams to just one unearned run for her 10th win of the season. Melle also belted a two-run homer off of Aughton and was named the Wright Automotive Player of the Game by the North Allegheny Sports Network.

The seventh-seeded Tigers immediately got to work in the top of the first inning and loaded the bases on back-to-back singles from Meghan McDonough and McKenna Rowlands and a walk by Alaina Whipkey. Aughton uncorked a wild pitch that brought home a hustling McDonough to give North Allegheny a 1-0 lead. An out later, Melle drove in her first run of the night with a sacrifice fly to score Rowlands from third base for a 2-0 advantage. 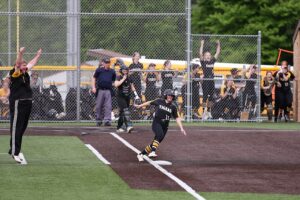 With Aughton reeling in the early going, the Tigers continued to pounce in the top of the third. With two outs and McDonough at third, senior Reagan Deitrick hammered an RBI double to deep left for a 3-0 North Allegheny lead. Melle followed the Deitrick double with a line-drive opposite field home run over the right field fence to bring home two more runs and the NA lead swelled to 5-0. The home run was Melle’s second of the season and increased her RBI total to 14 on the campaign. It was also North Allegheny’s fourth home run of the playoffs, collectively.

Following the Melle long ball, Aughton returned to form, and at one point, retired nine batters in a row. However, the Rams could muster very little against Melle and scored their only run on an RBI ground out by Illy Aggelou in the sixth that cut the NA lead to 5-1.

Melle closed out the win in the seventh, with the help of a superb diving catch by sophomore Carlyn Vaupel for the inning’s second out, as the Tigers punched their ticket to the WPIAL championship game with a 5-1 triumph.

Melle improves to 10-5 on the season with the victory. Aughton also threw a complete game but suffered the loss, allowing five runs on eight hits with seven strikeouts and one walk.

North Allegheny leaps to 13-9 on the season, while Pine-Richland’s season ends with a 12-5 mark. The Tigers will take on Seneca Valley in the WPIAL Class 6A championship on Wednesday, June 1 at California University of Pennsylvania’s Lilly Field. The game will be broadcast live by the North Allegheny Sports Network.