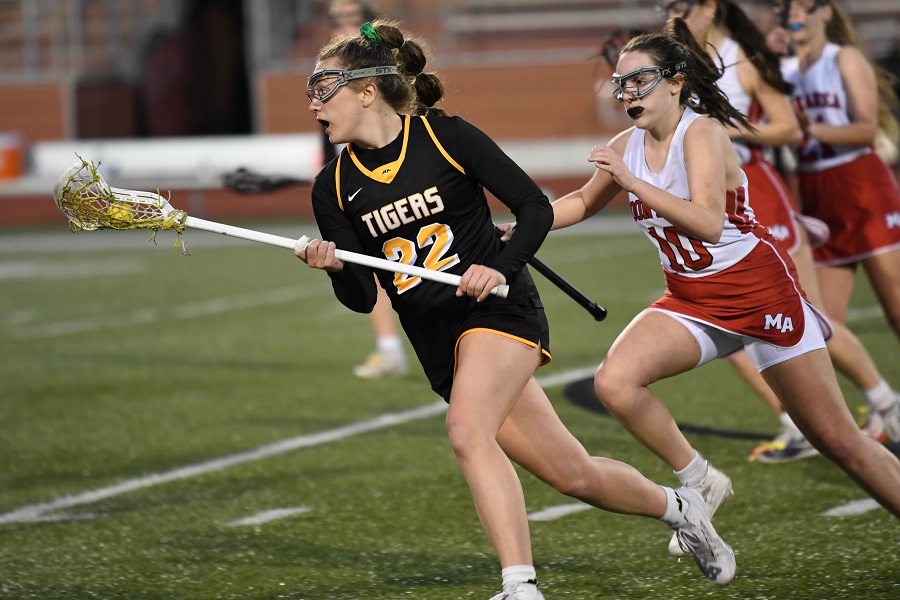 The North Allegheny girls’ lacrosse team rallied from a two-goal deficit late in the second half for a thrilling 16-14 triumph at Moon on Thursday night. The NA Tigers trailed 13-11 with 9:06 remaining in the game before rattling off five straight goals to secure an important Section 2-AAA victory.

Moon’s Avery Machusko, who finished with two goals on the evening, started the scoring with a goal 3:16 into the game before North Allegheny score the next four goals for a 4-1 lead. Junior Leigh Failla, freshman Avery Anderson, and seniors Allison Lyon and Bella Falo all scored within a two-minute span to give NA a three-goal lead with 19:34 left in the half.

North Allegheny led for the remainder of the first half and held a 10-7 advantage by intermission. Lyon, Failla, and Falo each added another goal, while junior Mila Prusak scored a pair and sophomore Maya Evans chipped in with another marker to help NA maintain a three-goal lead at the half.

Prusak scored her third of the night with a marker 1:46 into the second half for an 11-7 lead. However, Moon finally got on track and scored six consecutive goals to take a 13-11 lead with 9:06 left to play. The Moon attack was sparked by sophomore Seanna Rodriguez with a six-goal performance and senior Alyssa Lerch rang up five goals for the home squad.

Trailing for the first time all night, North Allegheny was undaunted as Falo scored three straight goals to put NA back on top, 14-13, with 3:27 remaining in the game. Prusak tacked on two more goals down the stretch for some breathing room and a 16-13 lead with just 43 seconds on the clock. Lerch netted the final goal of the night with 31 seconds remaining to bring the final score to 16-14, North Allegheny.

Prusak was NA’s team-leader in scoring with five goals and two assists. Falo also scored five goals and added an assist. Lyon and Failla netted a pair of goals, while Anderson and Evans tallied one each. Failla, Anderson, Lyon, junior Laurel Donley and junior Delaney Kennedy all helped facilitate the offense with one assist apiece.

Sophomore Isla Abrams handled the majority of the draw controls for NA and won 10-of-16 faceoffs. Senior Amelia Henderson scooped up a team-best three ground balls and Failla led the defense with three caused turnovers. Sophomore goalie Izzie Trunzo made 10 saves to earn the victory in net.

Following a fourth consecutive win, North Allegheny improves to 4-2 overall and 4-1 in Section 2-AAA. Moon falls to 3-2 in section play. The NA Tigers will host Butler on Friday night at 6:00 p.m. for a section tussle with the Tornado. The game will be broadcast live by the North Allegheny Sports Network.