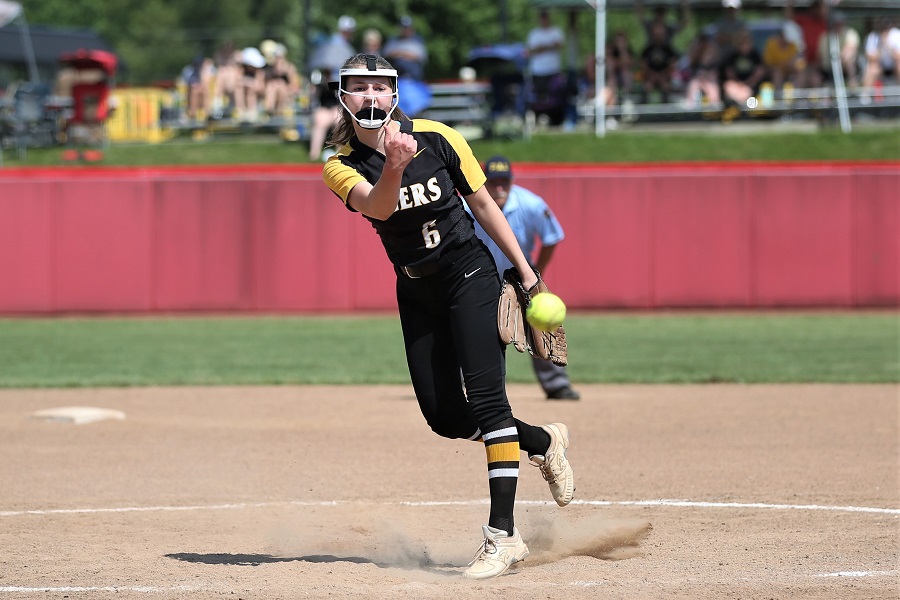 North Allegheny rallied from a 3-0 deficit for a dramatic 6-4 win at Mifflin County in the opening round of the PIAA Class 6A playoffs on Monday afternoon. It was the first win in the state playoffs for the Tigers since a 1-0 triumph against McDowell in the 2015 PIAA first round.

The District 6 champions, appearing in the state playoffs for the sixth time in the last nine years, struck first with an RBI single by Alexis O’Brien in the bottom of the second inning for a 1-0 lead. The host Huskies added a run in the second inning thanks to an RBI double by Payton McClure and increased the lead to 3-0 courtesy of an RBI groundout by Jaylee Bodtorf in the bottom of the fourth.

Mifflin County starter Madison Wolfgang was erratic with five walks and three hit batsmen, but managed to pitch her way out of danger, leaving seven runners stranded in the first three innings. However, that erratic nature finally came back to haunt Wolfgang in the fifth inning when McKenna Rowlands opened the frame on a hit by pitch. An out later, sophomore Anne Melle doubled and junior Annalyn Isaacs followed with an RBI groundout to get North Allegheny on the scoreboard trailing, 3-1. With two outs, senior Alaina Whipkey belted an RBI double to score Melle and the Tigers cut the deficit to 3-2.

The score remained 3-2 heading into the seventh inning with the Tigers’ down to their final three outs. North Allegheny answered the bell in the final frame and loaded the bases with nobody out. Senior Sydni Junker came through for a clutch two-run single to give North Allegheny a 4-3 lead. The Tigers added on to the lead on a sacrifice fly RBI by Mayson Brokos and junior Meghan McDonough tacked on another run with an RBI double to give the Tigers a 6-3 advantage. McDonough reached base four times in the game and finished 2-for-3 with two stolen bases, two hit by pitches and an RBI. Melle went 2-for-4 with two runs scored.

On a warm day coupled with an extremely dry infield at Mifflin County, the front of the pitcher’s circle wore down creating a large hole on the landing spot for Melle by the seventh inning. The NA hurler managed to retire the first batter in the inning but permitted a walk, a hit batsmen, and another walk to load the bases. Not unfamiliar with pitching in a critical spot in relief in the postseason, freshman Sammy Plotsko entered the game. Mifflin County power hitter Dakota Hershberger drove in a run with a sacrifice fly to cut the NA lead to 6-4, but also accounted for the inning’s second out. Following a base hit by Riley Hine that loaded the bases again, Plotsko buckled down and induced a game-ending popup off the bat of Sophie McCurdy to secure a 6-4 victory for the Tigers.

Melle pitched 6.1 innings to earn the victory, improving to 11-6 on the season. Plotsko earned her second save of the playoffs by recording the final two outs. Wolfgang suffered the loss, permitting six runs in a complete game effort.

Junker, who finished 2-for-4 with two RBI, and Plotsko were named the Wright Automotive Co-Players of the Game.

North Allegheny improves to 14-10 on the season, while Mifflin County’s season ends with an 11-10 record. The Tigers advance to the PIAA quarterfinals to face Pennsbury on Thursday at a site and time to be determined. The game will be broadcast live by the North Allegheny Sports Network.