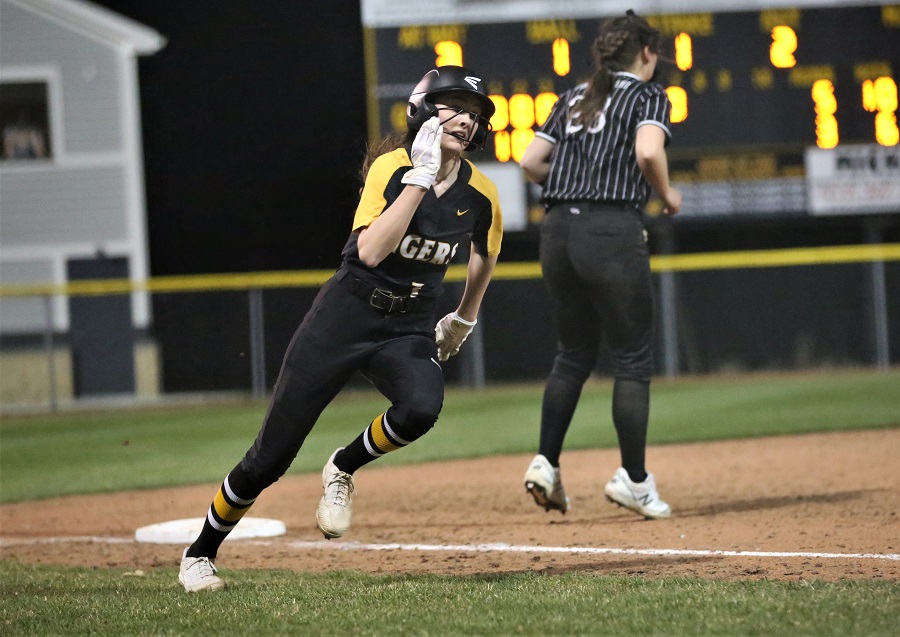 The North Allegheny softball team dropped a narrow 5-4 decision to the visiting Pine-Richland Rams on Wednesday night in Section 2-6A action. Pine-Richland centerfielder Jocelyn Langer broke a 2-2 tie with a three-run double in the sixth inning and made a game-saving catch for the final out with the bases loaded in the seventh to propel the Rams to the section win.

Facing Boston College commit Gabriella Aughton in the pitching circle, North Allegheny got the jump on the Pine-Richland righthander in the first inning when junior Meghan McDonough led off with a double and later scored on a sacrifice fly by Anne Melle to give the Tigers a 1-0 lead.

The Tigers added on to their lead in the bottom of the third and opened the inning with a double off the leftfield fence by sophomore Carlyn Vaupel. A wild pitch advanced Vaupel to third, and following a walk to McDonough, senior Alaina Whipkey laced a single through the left side of the infield to score Vaupel and give North Allegheny a 2-0 lead.

In the top of the fourth inning, a pair of North Allegheny errors opened the door for Pine-Richland’s first run of the night. Senior Ella Kasperowicz delivered a two-out single to bring home Delaney Jameson and North Allegheny’s lead was cut to 2-1.

The Rams knotted the score at 2-2 in the fifth inning on a two-out RBI triple from Mackenzie Gillis and seized a 5-2 lead in the top of the sixth courtesy of Langer’s bases clearing double.

Undaunted, North Allegheny staged a rally in the late innings and cut the deficit to 5-3 when Sadie Kelly’s clutch RBI single with two outs drove home McKenna Rowlands in the bottom of the sixth.

Aughton settled down in the middle innings and retired eight in a row before running into trouble in the bottom the sixth. After Aughton buckled down to leave two runners stranded in scoring position in the sixth, Pine-Richland turned to reliever Harley Aguglia to collect the final three outs in the seventh.

North Allegheny immediately began an uprising in the seventh with back-to-back singles from McDonough and Whipkey. A strikeout and flyout later, the Tigers were down to their final out before Mayson Brokos came through with an RBI single to score McDonough and NA trailed by just one, 5-4. Rowlands, who reached base three times on the night, followed with a walk to load the bases for junior Reagan Sheets. Sheets, who drove in the game-winning run to beat Fox Chapel earlier in the season, nearly blooped in a base hit to shallow centerfield but a diving catch by Langer for the game’s final out denied the Tigers and helped Pine-Richland escape with a 5-4 win.

Aughton earned the win for the Rams with six innings of work, allowing three runs, three walks and a hit batsman, while striking struck out six. Aguglia picked up the save and surrendered one run in one inning in the circle with one strikeout and two walks. Melle was the starter for NA and permitted five runs (three earned) in 5.2 innings with three strikeouts and just one walk. Freshman Sammy Plotsko pitched the final 1.1 innings scoreless and fanned a pair of batters along the way.

Wright Automotive Player of the Game honors went to McDonough, who finished 2-for-3 with a double, a walk and two runs scored.

North Allegheny falls to 5-2 overall and 1-1 in Section 2-6A, while Pine-Richland improves to 5-1 and 3-1 in the section. The Tigers look to bounce back on Monday with a visit to Norwin to take on the Knights in another section contest.