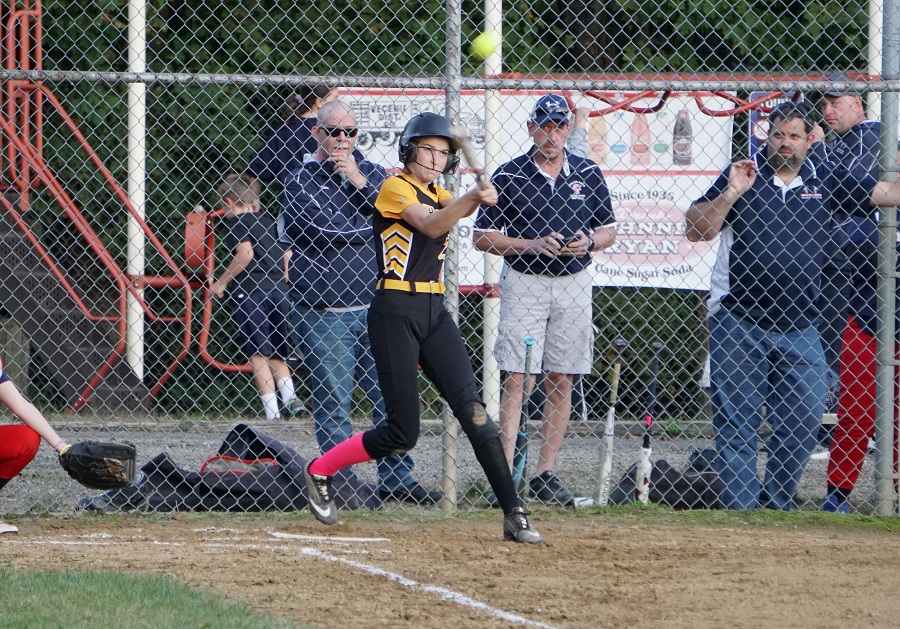 The first inning of game one began with Shaler taking a quick lead of 1-0.  The Tigers’ bats awoke early in the top of the second inning as Kenna White (Senior) started the on-slaught with a single, with Lizzie Wetmore ( Junior) following up by crushing the ball with an inside-the-park home run to right center field, collecting two RBIs and regaining the lead at 2-1. Evelyn Wiethorn (Sophomore) singled and Audrey Laswell (Sophomore) nailed a double, collecting two RBIs of her own and adding two more runs to the tally.  Carly Snyder (Junior) lined-drived a triple, gaining an RBI and another run as Laswell scored.  Meg Quinlan (Sophomore) singled in Snyder. The Tigers held a respectable 6-1 lead going into the second inning.

NA’s defense proved too tough for Shaler as they were shut down during the bottom of the second inning. Pitcher Evelyn Wiethorn struck out two batters and Abby Birch (Senior) nabbed a routine pop fly to the outfield.

The Tigers’ offense added another run at the top of the third inning, with Wetmore’s single pushing in Birch, who had smacked a triple to left center field. Wiethorn managed a single but no more runs scored. The Knights’ bats came alive during the bottom of the third, as a few singles, and some well-placed doubles increased the score to 7-3.

NA gave up one run in the bottom of the fourth, as Shaler put together a string of solid hits. Madison Klinefelter (Junior) showed off her strong arm as she threw out a Shaler runner who tried to push a double into a triple.

At the top of the fifth, Wetmore hit a single, and Kenna White (Senior) doubled, scoring Wetmore. Shaler bats were quiet again in the bottom of the fifth as the Knights were scoreless again, as ground outs to Crean at second  and Wiethorn, followed with a strike-out, ended the fifth inning, with NA up 10-4 going into the sixth.

North Allegheny added two more runs in the top of the sixth, as Laswell’s double allowed Marangoni ( who stretched a single into a double) to score. Meg Quinlan (Sophomore) dropped in a single over the shortstop, and Laswell scored from second.

In the bottom of the sixth, NA defense held tight, only allowing one run to score. The Titans grounded out to Crean and  Wetmore, and Birch made a nice catch in the outfield to end the inning.

In the top of the seventh, singles by Quinlan and Birch set the stage for Wetmore, as she hit another home run, adding three more runs to the score. Singles by Klinefelter and Marangoni followed, but the Titans defense held firm.

Shaler came back strong, as they scored six runs in the bottom of the seventh on a string of base hits. It wasn’t enough, though, as the game ended with NA winning, 15-11.

In between games, Abby Birch and Kenna White were honored, along with Shaler’s seniors, during their Senior Night recognition program—a sportsmanlike and kind gesture from the Shaler team.

Game Two of the double-header began with Shaler coming on strong, scoring four runs on an impressive string of base hits. NA scored two runs in the bottom of the first, with walks by Wetmore, a single by White, and a double by Wiethorn to right center.

The Tigers showed their strong defense as they shut down Shaler’s batters in order with a strikeout by pitcher Emily Yanchak ( Sophomore), and ground outs to Wetmore and Yanchak. The bottom of the second  began with two quick outs , but the Tigers quickly put together three runs with a double from Yanchak, and singles by Snyder, Quinlan, and Birch. Score at the end of two innings was 5-4 in NA’s favor.

Shaler remained scoreless for the top of the third inning, and NA’s bats were hot once again, with doubles by White, Wiethorn, and a single from Klinefelter resulting in two more runs. Claire Medic ( Junior) hit a single, and Snyder followed up with another single, pushing in another run. The score at the end of three innings was 8-4.

At the top of the fourth inning, Shaler was still a threat as they put together six singles and a triple to score six runs. The Tigers returned with three more runs from a home run from Wetmore, and KIinefelter added on with two more RBIs, her single hitting in White and Wiethorn. NA had a slim lead after four innings of 11-10.

Shaler remaining scoreless in the top of the fifth, and NA scored three more runs, with a triple from Snyder, a single from Quinlan, and a triple from Meg Patterson (Junior). Patterson tagged up on Birch’s flyout to center field, allowing the Tigers to increase their lead to 14-10.

Shaler bats were quiet in the sixth inning, failing to put together any runs, as the Tigers increased their lead. Singles from Wiethorn and Klinefelter set the stage for a line-drive double from Medic that pushed the lead to 16-10. Doubles from Laswell and Patterson, and singles from Yanchak and Quinlan created scoring opportunities, pushing in four more runs. The score was now 18-10.

The seventh inning ended in spectacular fashion, as Shaler fought back with an impressive string of three singles in a row. A flyout to Snyder followed. With one out, bases loaded, Shaler crushed a ball to deep center field. Birch caught the easy out, but the runner at third tried to tag up, making the mistake of challenging Birch’s cannon.  She gunned the runner out at home, cementing the victory for North Allegheny, 18-10. The Tigers end their regular season and now head into the playoffs.