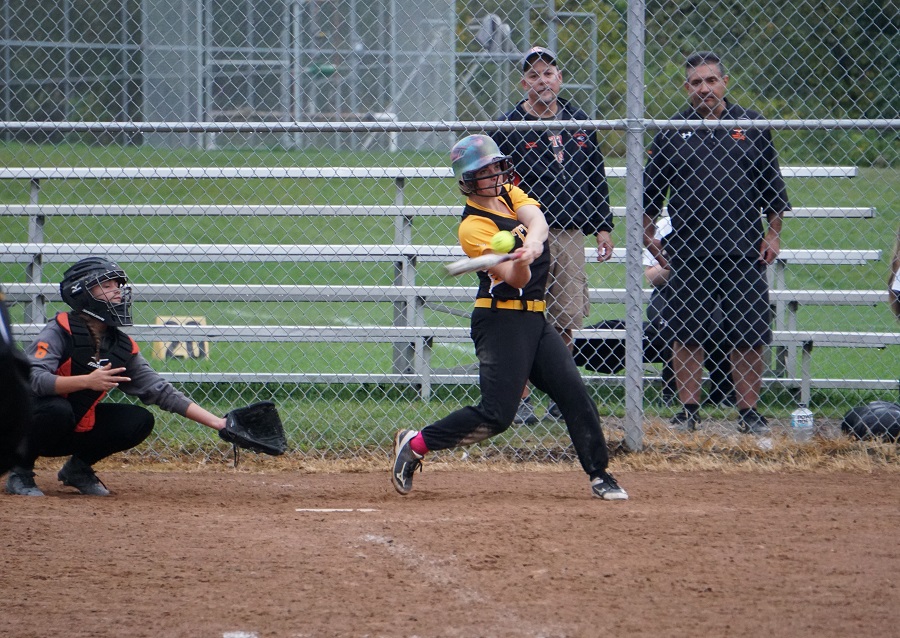 With the constant drizzle and rain to contend with, NA allowed five runs in the top of the first inning, but Kenna White (Senior) put an end to the inning, making all three outs.  First she snagged a pop-up, next a force out at third, but she saved the best for the last out.  Carly Snyder (Junior) stopped a hard-hit low line drive in left field, threw it to White at third. White, determined to stop the runner heading home, chucked the ball to catcher Audrey Laswell (Sophomore) who tagged the runner out at home.  This was just the momentum the Tigers needed heading into the bottom of the first.  Nikki Crean (sophomore) started things off right with a double.  Abby Birch (Senior) followed with a single, bringing Crean home for the first run for the Tigers. Then, Lizzie Wetmore (Junior) hit a powerful triple, bringing in another run. White and Wiethorn each also posted a hit and brought in one more run.

Bethel Park was kept at five runs in the top of the second as Birch and Megan Quinlan (Sophomore) each caught flyouts in the outfield.  Crean earned the last out, stopping a grounder and tossing it to Wetmore at second.  In the bottom of the second, Laswell hit deep left, earning a double, followed by Snyder earning another double and an RBI.  Crean got the last RBI of the inning with a flyout.

Two runs snuck by the Tigers in the top of the third, but Madision Klinefelter (Junior) caught a flyout in left center, Wetmore jumped and grabbed a hard-hit line drive at shortstop, and White backhanded a grounder hit down the line at third, tossing it Crean at second for the out.  Up to bat, White hit the fence and ran for a double. Evelyn Weithorn (Sophomore) followed with a long line drive.  Klinefelter brought in the one run of the inning, bringing the score to Bethel 7, NA 6.

The top of the fourth went quickly, with Crean, Birch, and Quinlan all catching flyouts, keeping Bethel from scoring.  Bethel, however, couldn’t stop NA from scoring this inning! Snyder got a giant hit to right field, earning a triple, which was followed by a single from Emily Yanchak (Sophomore) with one RBI and Crean with another RBI.  Birch and White each hit doubles, both bringing in a run, and Wetmore hit a single, bringing in the final run of the inning.  NA was finally in the lead, 10-7.

Bethel came back at the top of the fifth and came through with a big inningl.  Snyder, in left, ran and dove for the ball, coming up with a snowcone. Klinefelter stopped a grounder in left center, throwing it to White at third, who turned and shot the ball to Laswell at home, making the tag.  White stopped the inning with catching a line drive. NA’s bats couldn’t get them anywhere in the bottom of this inning. Bethel Park was again in the lead, 11-10.

Once again, Bethel Park came back and earned more runs.  Eventually, Crean caught a fly behind second followed by Birch with a flyout in right center and Klinefelter with a flyout in left center.  NA, although trailing, refused to allow Bethel Park to take them. Yanchak, Crean, and Quinlan had all hit singles when Birch got up to bat. Birch hit a single, but it was just far enough to bringing in two runs.  Next up, Wetmore cranked one to deep right center and brought in another run. Although White’s ball got caught in right center, it had just enough juice to earn another RBI. Weithorn, hitting s double, now tied up the game, 15-15.

Down to the wire, Bethel Park earned one more run before Wetmore snagged a line drive for the first out.  Yanchak earned the last two outs at pitcher with a strikeout and a pop-up. Bethel was in the lead, 16-15, going into the bottom of the seventh.  Yanchak hit a single, right in the hole behind second, Crean and Quinlan also hit singles. Birch tied up the game at 16-16 with no outs. Bethel moved in, crowding home and trying to stop any runs, when Wetmore came up to bat.  Wetmore sent the ball sailing over the right center fielder’s head, bringing in the winning run and ending the game. Final score, 17-16, Tigers.

With more cold rain and dark, dreary clouds, NA came out swinging in the top of the second game.  Wetmore, White, and Quinlan all hit doubles; Quinlan, Birch, Klinefelter, Laswell, Birch, and Wetmore hit singles.  After batting through the order, NA lead Bethel, 11-0, which continued into the second inning as Wetmore and Quinlan each caught flies, followed by a grounder to Wetmore, who made the out with Wiethorn at first.

In the top of the second, Laswell and Yanchak each earned one RBI.  Bethel’s bats were back at the bottom of the second, earning five runs.  Wetmore had had enough, making a dramatic double play. She stopped a grounder, touched second, and wailed it Weithorn at first.  Yanchak got the final out of the inning with strikeout.

At the top of the third, White gained one more for NA with a double, a deep fly to right center.  At the bottom of the third, NA struggled with Bethel’s powerful bats and the slippery conditions. Eventually, Yanchak struck out one player, and White made a double play with a tagout and a toss to Crean at second for the force.

Bethel Park kept NA at 14 at the top of the fourth, but NA couldn’t do the same with Bethel.  Quinlan, in right field, took off at a sprint and dove for a low line drive, making the first out of the inning.  Wetmore made the next two outs at second. Bethel Park was again in the lead, 17-14.

Again, Bethel kept NA at 14 at the top of the fifth.  This time, though, NA was able to also keep Bethel from scoring.  White caught a pop-up, Snyder ran and dove for a ball in left field, and Crean stopped a line drive.

NA still couldn’t get anywhere at the top of the sixth, Bethel’s tough defense stopping every ball.  NA’s defense allowed two more runs in before Birch, White, and Snyder all caught fly balls.

After walking Crean in the start of the seventh, Quinlan hit a beautiful triple, bringing Crean home.  Unfortunately, that was the only run earned, and NA fell to Bethel Park, 19 -15.