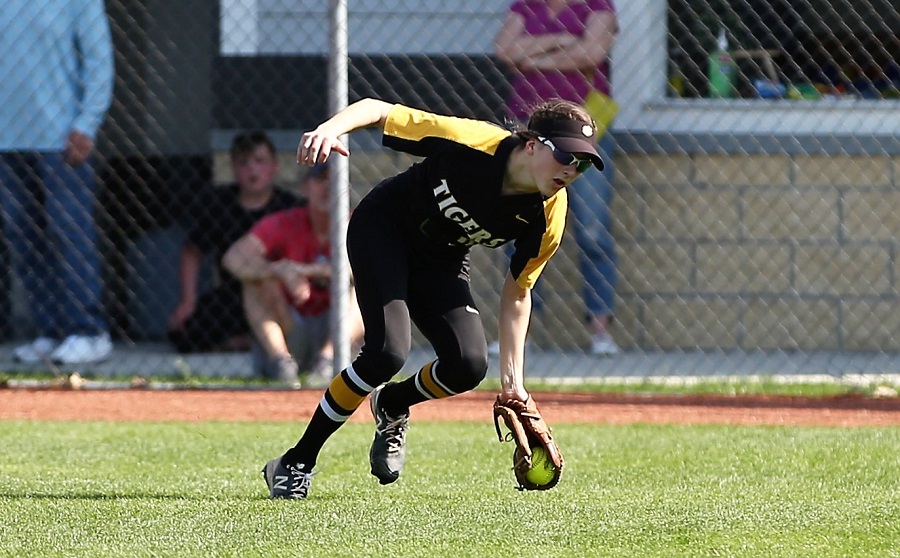 The North Allegheny softball team erased an early five-run deficit and outlasted the Norwin Knights for an 8-7 win in 11 innings on Saturday afternoon in a Section 2-6A contest. The 11-inning marathon was the longest game played by North Allegheny since a 13-inning loss to Trinity, 4-2, in the first round of the 2005 WPIAL playoffs.

Saturday’s contest was a topsy turvy affair that was played on a beautiful sun-splashed afternoon. The Tigers struck the first blow in the bottom of the first inning on an RBI single by Annalyn Isaacs that scored Alaina Whipkey for an initial 1-0 lead.

Norwin turned the tables quickly with one swing in the top of the second. After a leadoff walk by senior Mallory Wensel, junior Alyssa McCormick yanked a line drive over the leftfield fence for a two-run homer and 2-1 lead.

The Knights added on to their lead in the top of third for a 6-1 advantage thanks to a pair of RBI singles courtesy of Angelina Pepe and Wensel, followed by RBI fielder’s choice groundballs from McCormick and Emma Novotnak.

The Norwin five-run lead was significant but far from insurmountable as NA quickly responded in the bottom of the third inning. Junior Mayson Brokos trimmed the deficit to 6-2 with an RBI single and freshman McKenna Rowlands connected for a two-run single to cut the score to 6-4, Norwin. Junior Meghan McDonough tacked on a two-run single of her own to even the score at 6-6. 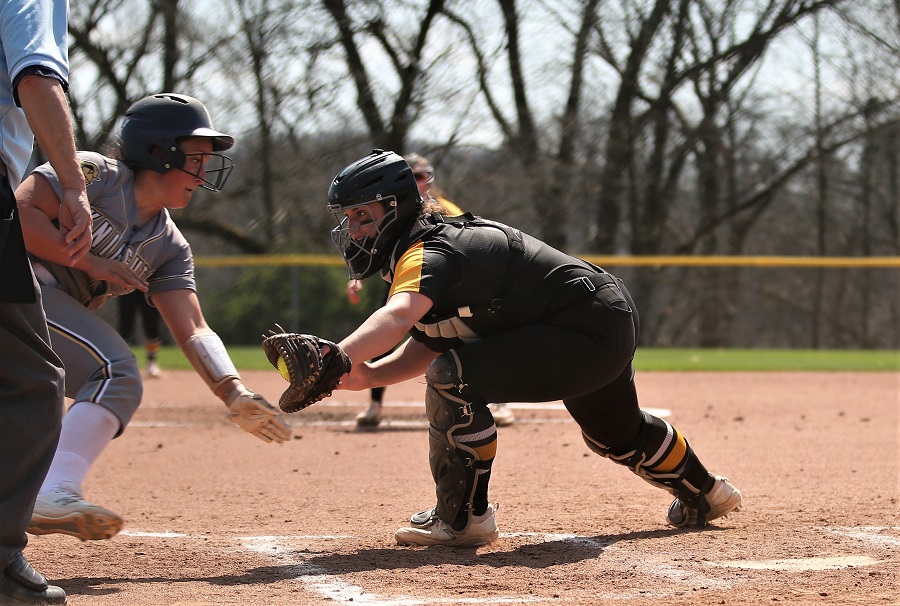 NA catcher Reagan Dietrick tags out Norwin’s Bailey Snowberger in the 4th inning on a play at home plate.

In the bottom of the fourth, the Tigers took the lead when Brokos scored on a Norwin error for a 7-6 lead. The Knights responded in the top of the sixth with a sacrifice fly RBI by Bailey Snowberger to tie the contest at 7-7, and later in the inning, threatened to take the lead with the bases loaded and two outs. North Allegheny starting pitcher Anne Melle battled throughout the afternoon but started to labor on the hottest day of the season with three walks in the sixth. In stepped freshman Sammy Plotsko in relief, who promptly struck out cleanup hitter Pepe to leave three runners stranded and the game remained deadlocked at 7-7.

After 14 runs combined were scored in the first six innings, North Allegheny and Norwin went deep into extra innings without another run crossing the pay station. Even with international tiebreaker rules in effect, with a runner beginning the inning at second base to start the 10th, neither team could score a run.

In the top of the 11th, it appeared Norwin might finally break the tie with runners at first and second and one out. Pepe smashed a sinking line drive to the left-centerfield gap but NA leftfielder Katie Lucas made what proved to be a game-saving, shoe-top grab (photo above) and then doubled up Norwin’s lead runner with a throw to second base for an inning-ending double play.

The Tigers finally scored the game-winning run in the bottom of the 11th thanks to a walk-off RBI single by Rowlands that scored Brokos for a thrilling 8-7 victory. Brokos was 3-for-5 with a walk, an RBI and three runs scored. Rowland finished the day with a 2-for-4 performance with a run, two sacrifice bunts and three RBI.

Plotsko, who entered the game in the sixth, tossed 5.1 innings of scoreless relief to earn her second win of the season. Plotsko permitted only two hits and one walk, while striking out five batters. For their pivotal performances, the freshman duo of Plotsko and Rowlands earned Wright Automotive Co-Player of the Game honors.

Other notable efforts included McDonough’s 2-for-4 outing with a walk and two RBI. Melle and Whipkey each collected a pair of hits with a run scored. Isaacs had a three-hit day with an RBI and a run scored.

For Norwin, Pepe grinded through 10.1 innings in the pitcher’s circle but suffered the loss. The righthander permitted eight runs (seven earned) with four strikeouts and one walk.

With the win, North Allegheny improves to 7-3 overall and 3-2 in Section 2-6A. Norwin slips to 1-6 overall and 1-4 in the section. The Tigers are scheduled to rematch with the Knights on Monday afternoon at 4:00 p.m. in Westmoreland County.