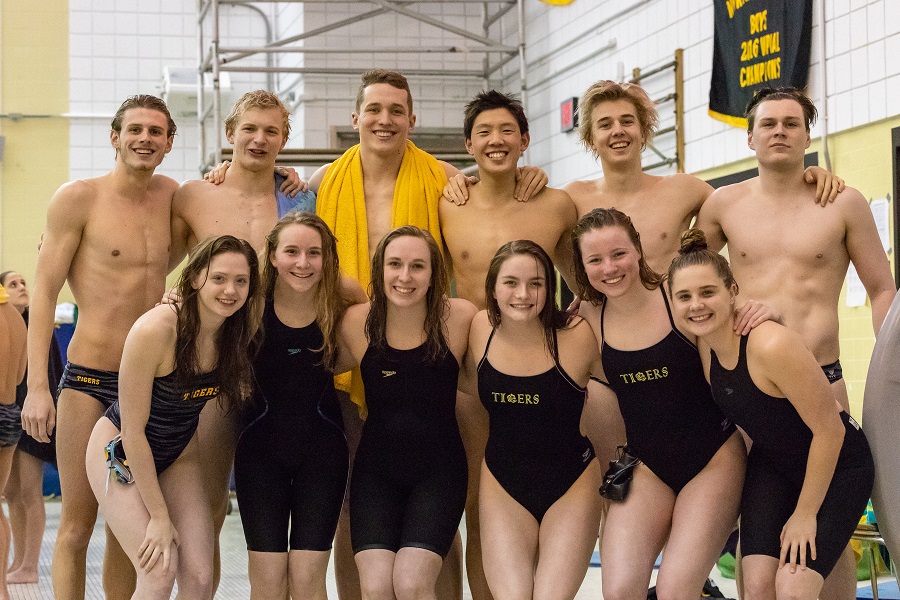 The senior relay team of Phillips, Chen, Borisov and Wright started the boys off by winning the 200 Medley Relay.  Tim Compton won the 200 Free and Branko Kosanovich won a close race in the 200 IM.  Wright won the 50 Free, while Borisov won the 100 Fly. Josh Galecki touched first in the 100 Free, while Ricky Mihm easily out distanced the field in the 500 Free. Another senior relay team of Wright, Borisov, Ehling and Songer won the 200 Free Relay.  Divers Knepp and Liam Cross teamed with two swimmers to finish fourth in the relay.  Matt Turzai won the 100 Back and Andrew Yang won the 100 Breast.  The 400 Relay team of Alex Grahor, Kosanovich, Compton and Mihm finished the meet by winning the 400 Free Relay.

Torie Buerger started the girls off with a win in the 200 Free. Molly Smyers then followed by gliding to victory in the 200 IM. Smyers also won the 500 Free. Olivia Krause won the 100 Fly and Quinn Frost won a close race in the 100 Free. Seniors McGrath, Cuba, Laun and Flavin finished a close second in the 200 Free Relay.  Diver Jordan Atkins joined three swimmers to finish fourth while the diving team relay composed of Ferringer, Kim, Olivia Schenk and Restilli finished a close sixth.

The swimmers return to the pool Saturday for the Last Ditch Invitational.  This event will start at 5 p.m. and is a last chance for swimmers in the area to get a WPIAL qualifying time.