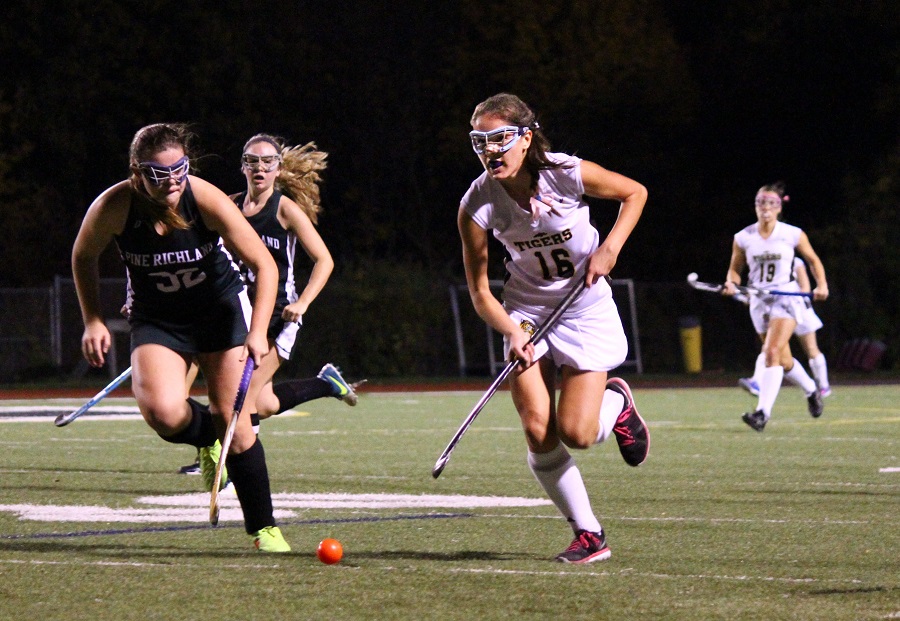 The North Allegheny Field Hockey Team dealt a crushing blow to the playoff hopes of the Pine-Richland Rams on Tuesday night with a convincing 6-0 victory at Newman Stadium. With a win, the Rams would have all but secured a playoff berth. Instead, Pine-Richland must now defeat the Norwin Knights tonight and hope for the best in a point differential tie-breaker scenario with Penn-Trafford.  For the Tigers, the 6-0 victory concludes a perfect trek through Section 1-AAA.  In section games, NA outscored its opponents by an astonishing margin of 66-1.

While the Rams were playing for their playoff lives, it was the Tigers who stormed out of the gates with fervor and took a 1-0 lead just 3:17 into the game on a tally by senior Alyssa Leonard. It appeared Pine-Richland settled into the contest following the Leonard goal as the teams played back and forth until the final five minutes of the half. At the 25:45 mark, senior Kailey Vogl cashed in on a penalty corner opportunity to give the Tigers a 2-0 advantage. Junior Maddy Snyder, who assisted on the first two goals, delivered a back-breaking goal to the Pine-Richland cause with just 47 seconds left before halftime to give the Tigers a 3-0 lead. Snyder finished the game with one goal and three assists and was named the Wright Automotive Player of the Game by the North Allegheny Sports Network.

The Tigers kicked into another gear in the second half and finished off the Rams with goals by Nicole Burns, Jessica Brandon, and Brooke Cameron. North Allegheny dominated the scoring chances on the night and outshot Pine-Richland, 19-4.  North Allegheny led in penalty corners, 11-3, converting on two of them. In net, Isley Smith and Katie Shideler split the goaltending duties and combined for three saves. PR’s Isabella Bailie played valiantly with 12 saves, but was overmatched by the high-powered Tigers attack.

North Allegheny finishes the regular season with a 15-3 overall record and 10-0 section mark. Pine-Richland falls to 10-3 overall and 6-3 in section play.  The Rams face the Norwin Knights tonight.  North Allegheny will host a WPIAL semifinal contest on Wednesday night at Newman Stadium.  The opponent will be the second place finisher from Section 2-AAA.