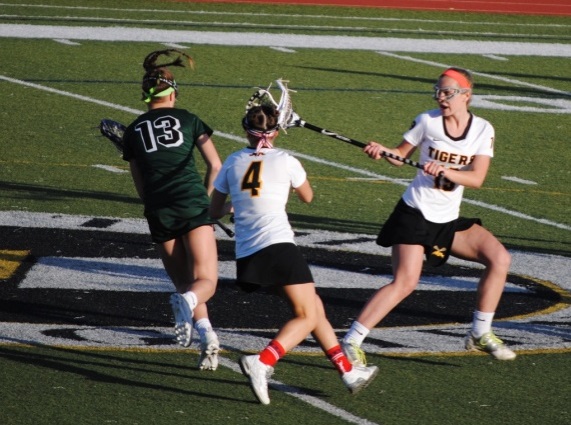 The North Allegheny girls’ lacrosse team returned to section play on Tuesday night but sustained a 16-7 setback to the Fox Chapel Foxes at Newman Stadium.

Abby Washabaugh and Paige Jones scored first half goals for the Tigers, but the Foxes constructed a hefty 10-2 lead by intermission. NA traded goals with Fox Chapel in the second half but it was not enough to overcome the eight-goal deficit. Washabaugh scored her second goal of the game to help the Tigers attack, Caroline Palguta scored twice, Jones netted her second goal, and Genna Prutting scored for NA in the second half.

North Allegheny drops to 2-8 overall and 1-7 in Division 1, Section 2. Fox Chapel remains in first place with an 8-2 overall mark and 7-1 record in section play. The Tigers host Franklin Regional tonight in a game that will be broadcast live via the internet on the North Allegheny Sports Network. Start time is set for 8:00 pm.