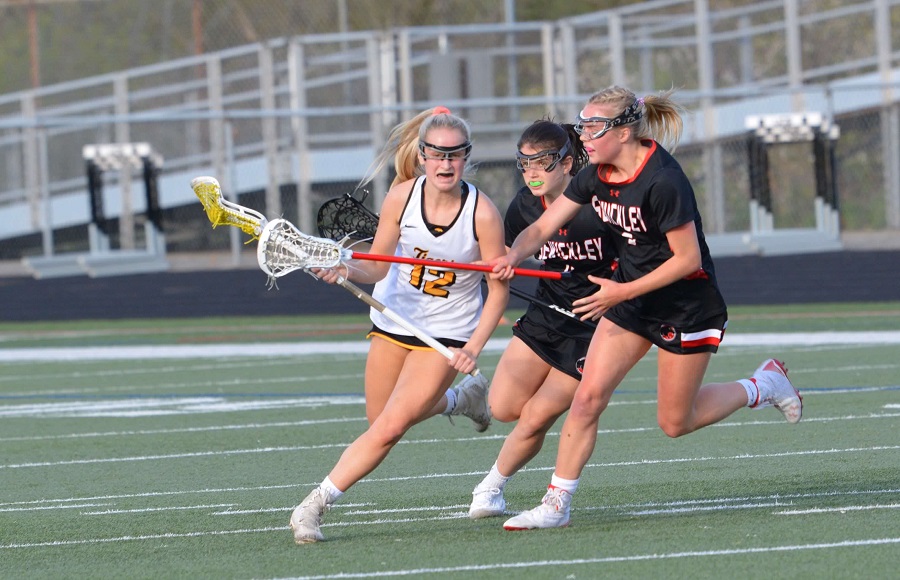 North Allegheny’s eight-game winning streak was snapped on Tuesday night as Sewickley Academy outlasted the Tigers for an 18-16 win in Section 2-AAA action. Trailing by three goals with 2:37 remaining, the Tigers staged a furious late-game rally to tie the game at 16-16 with 1:29 left to play. Unfortunately for North Allegheny, Haverford University commit Ellie Hughes scored what proved to be the game-winning marker just 14 seconds later to propel Sewickley Academy to the win.

The first half was a seesaw affair that was deadlocked, 5-5, with 13:55 remaining before North Allegheny scored four of the next five goals to grab a 9-6 lead. Central Michigan commit Skye DePrado netted four of her team-leading five goals in the first half to help NA to the four-goal lead.

Following a timeout by Sewickley Academy coach Chelsea Cameron, a former North Allegheny girls’ lacrosse standout (Class of 2007), the Panthers began to chip away late in the half. Ashley Close scored with 2:10 remaining in the first half to spark a 5-0 run that carried into the opening minutes of the second half and gave Sewickley Academy an 11-9 lead.

With the Panthers holding a 12-10 advantage with 14:36 to play, the Tigers rallied to even the score at 12-12 with 12:10 remaining thanks to back-to-back goals by senior Kate Oates. Oates finished with a hat trick, upping her season goal total to 19 on the season.

Tigers head coach Harry Datz called a timeout and NA responded with three quick goals in the next 1:08 of game action. Sophomore Mila Prusak started the comeback bid and Bella Falo followed with her third goal of the night, cutting the deficit to 16-15 with 2:15 left. DePrado netted her fifth of the night and 58th of the season with 1:29 to play, tying the score at 16-16. However, Hughes scored just 14 seconds later and Mary Grace Gordon put the game out of reach with the final goal with 16 seconds left, bringing the final score to 18-16, Panthers.

In addition to DePrado’s five-goal performance, Wilhite, Falo and Oates all tallied a hat trick. Prusak and senior Alyssa Redshaw scored one goal each. Freshman goalie Izzy Trunzo had a terrific night in net, making 11 saves on several point-blank shots from the Panthers. For keeping the game within reach for the Tigers, Trunzo was named the Wright Automotive Player of the Game.

For Sewickley Academy, Hughes led the way with five goals, while DiSantis and Close each notched hat trick.

Despite the loss, North Allegheny has already clinched a playoff spot thanks to their previous eight-game winning streak. The Tigers fall to 8-2 overall and 6-1 in Section 1-6A. Sewickley Academy clinches a playoff berth with the win and improves to 8-1 overall and 6-1 in the section. The Tigers look to rebound on Friday night at 6:00 p.m. against Fox Chapel. The home game will be broadcast by the North Allegheny Sports Network.