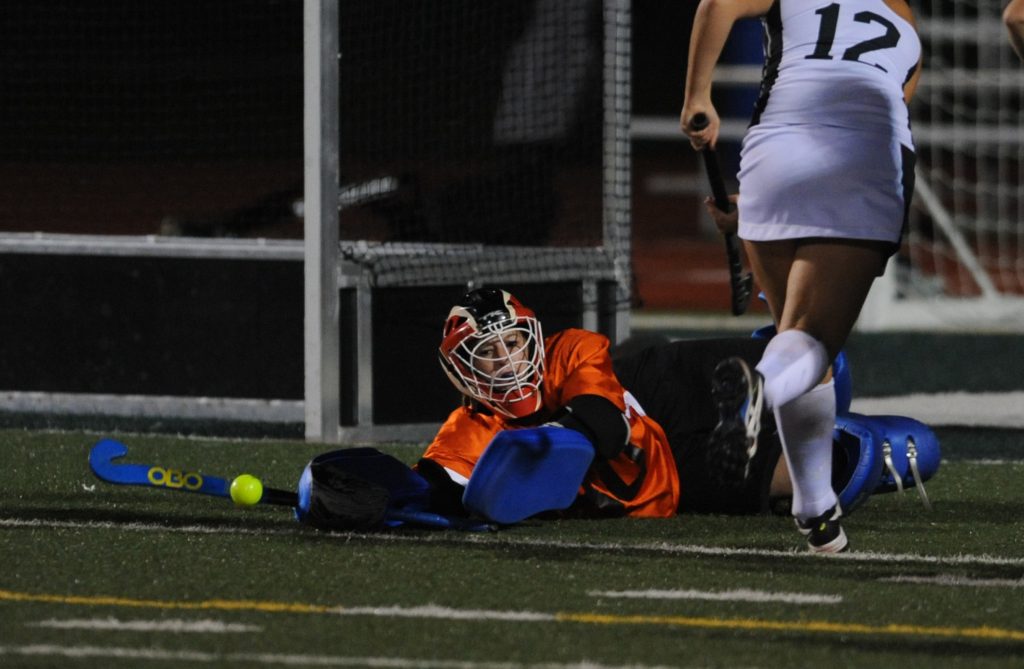 For the first time in over five years, the North Allegheny field hockey team lost a section game as the Pine-Richland Rams defeated the Lady Tigers on Wednesday night, 3-0. Prior to last night, the previous time North Allegheny lost a section contest was on September 14, 2011 to Penn-Trafford, 2-1, in overtime. Since then, the Lady Tigers had gone an astonishing 53 consecutive section games without a loss, going 51-0-2 during that span.

Both North Allegheny and Pine-Richland entered last night’s contest undefeated in Section 1-AAA with sole possession of first place at stake at the midway point in the season. The Rams, playing on their home turf, held a decided possession advantage throughout the first half and capitalized thanks to a penalty corner goal by Sarah Metzmaier with 9:40 remaining in the half. The Rams finished the night going 2 for 7 on penalty corner opportunities.

In the second half, the field remained tilted in Pine-Richland’s favor. Undaunted, the North Allegheny defense and goalie Rena Israel performed well under duress. Starting goalie Katie Shideler also performed admirably, but it was Israel who made several spectacular stops in the second half to keep the Tigers within striking distance. One such stop occurred just three minutes into the second half with the Rams gaining a two-on-one break into the circle. From the right side, Metzmaier attempted to pass to a wide-open teammate to her left but Israel lunged with her stick to swat the pass away (seen in photo above) and keep the deficit at 1-0, Rams. For her efforts, Israel was named the Wright Automotive Player of the Game.

Along with Israel, Gabby Herbert and Kayley Cooper held things together on defense. Other Tigers who stood out included sophomore Bridget Russell who played well in the midfield. When North Allegheny was able to mount pressure on the Rams, it was Gracie Limauro, Angie Genter and Brooke Cameron who provided the best NA chances.

However, this night belonged to Pine-Richland and the Rams were able to put the game away with goals by Marina Miller and Vivian Cavanaugh in the second half to come away with a 3-0 victory. The final result not only ended a long section unbeaten streak for the Tigers but also set aside a lengthy head-to-head losing streak for Pine-Richland. Last night’s win for Pine-Richland was the first against North Allegheny since October 18, 2007, concluding a 16-game winless streak against the Tigers. Despite the loss to the Rams back in ’07, North Allegheny still went on to win the WPIAL championship that season.

North Allegheny slips to 4-6-1 overall and 4-1 in Section 1-AAA following the defeat. Pine-Richland jumps to 5-0 in section play. The Lady Tigers host Peters Township on Monday night in a non-conference battle. Start time is set for 7:30.