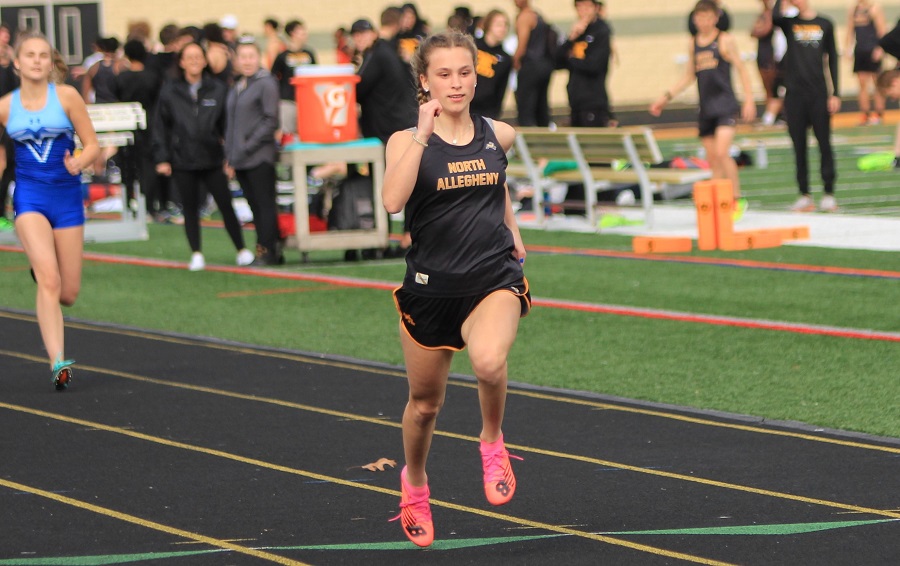 The North Allegheny track and field team opened the 2022 season by competing against Villa Maria and Erie Cathedral Prep at Newman Stadium.  Both Tiger teams earned victories with dominating performances. The NA Girls picked up a 104-19 win over the Victors, while the NA Boys topped the Ramblers 106-17.

Leading the Lady Tigers was Rachael Johns, who earned a triple victory by winning the High Hurdle race, the High Jump and the Long Jump. Other Individuals that scored in multiple events included freshman Isabella Costa winning the 200m Dash and scoring second place in both the High Jump and Long Jump. Jacqueline Junko jumped to a second-place finish in the Triple Jump and won the 300m Hurdle Race.  Veteran sprinter Jameson Stotsky sprinted to secure a victory in the 400m Dash and finished third in the 100m Dash. Distance runner Maura Mlecko finished with a second and third place showing in the 800m and 1600m runs, respectively.

The Boys team was equally as dominating. The veterans of the team showed they were ready and eager to compete this season. Another triple victory winner came from Owen Curran who impressively earned first place in the High Jump and both 110m High and 300m Intermediate Hurdle races.  Other notable performances came Rohan Gupta earning second place in both the Triple Jump and Long Jump.  Michael Gauntner paced his races to secure second place in the 1600m and third place in the 3200m runs.  Sprinter Luke Grimes dashed to third place finishes in the 100m and 200m sprints. Newcomer to the sport, Kolin Dinkins, won his first event in the Long Jump and then place second in the 200m Dash and High Jump.

The future looks bright for both teams of NATF.  The Tigers square up against rival Seneca Valley next week on Wednesday, April 6 in the first sectional showdown of the season. Competition begins at 3:30 p.m. at Newman Stadium.