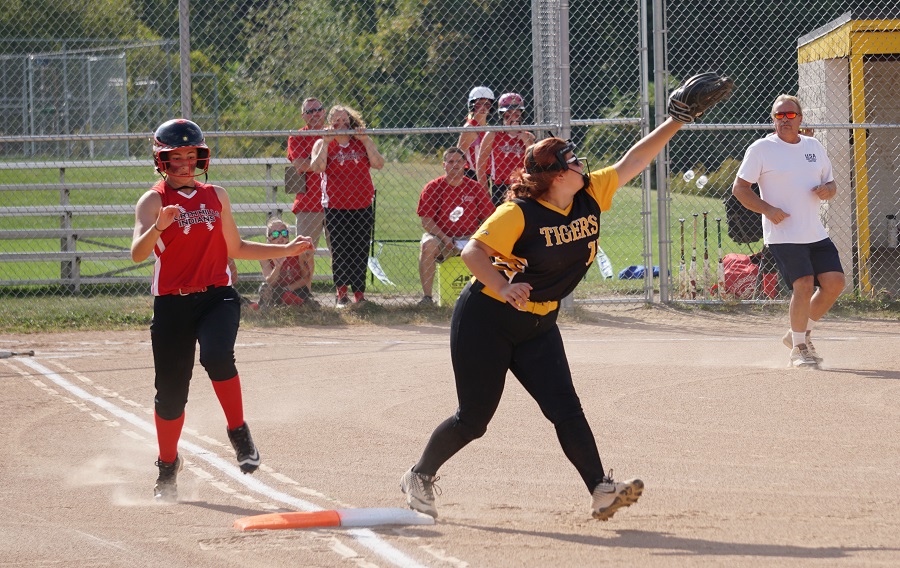 The North Allegheny Tigers had another tough weekend, losing both games to North Hills, 21-9 and 14-4.

In game one, top of the first, North Hills was relentless.  They hit every hole in the field. Kenna White (senior) caught a tough grounder at third on the bounce and chucked it to Katie Marangoni (junior) at first for the first out.  Deep into the inning, Madison Klinefelter (junior) snagged a fly on the run in left center, and Lizzie Wetmore (junior) stopped a grounder at short and tossing it to Megan Quinlan (sophomore) at second for the final out of the inning.  The Tigers were worried going into this inning, but things changed quickly.  Quinlan hit a daisy cutter up the middle for a single, followed by a double into deep center by Abby Birch (senior).  White followed with another single, two now on base, when Wetmore stepped into the box.  For the first time at Marshall after the field renovations, the ball was hit out of the park by Wetmore, earning three runs. The rest of the team continued hitting the ball with another single by Marangoni, Emily Yanchak (sophomore), Audrey Laswell (sophomore), and a double by Nikki Crean (sophomore).  The game tied up, 7-7.

Despite the momentum in the bottom of the first, the second inning was another tough one with North Hills continuing to pound the ball.  Wetmore stopped a line drive for one out, then, as North Hills was trying to play pickle, Wetmore ran down the runner at third, throwing to home and Crean tagget out the runner.  Klinefelter ended the inning with a flyout on the run in left center. Unfortunately, North Hills gained four more this time at bat. When NA had a turn at bat, they couldn’t gain an inch.  White got a beautiful double, but got stranded out on second after a few caught pop-ups. Now, the score crept up to 11-7, North Hills in the lead.

In the third inning, Wetmore stopped a tough grounder at short, throwing it to White at third for the out.  Yanchak stopped a powerful line drive up the middle for the second out, but soon after, two more runs snuck in.  Evie Wiethrorn (sophomore) ended the inning by chucking the ball from left to third for White to make the tagout and end the first half.  With NA’s turn up at bat, Marangoni got it started with a single, followed by a double to deep left center by Klinefelter. Yanchack got out on the fly, but earned an RBI as Marangoni came home. Meg Patterson (junior) hit a double, bringing in one more run.  Unfortunately, the Tigers were still trailing, 13-9.

In the top of the fourth, Wetmore stopped a line drive, and Yanchak stopped a grounder, getting the out at first with Marangoni.  Two more runs came in before Wiethorn ended the inning with a flyout in left. No runs were scored by the Tigers in the bottom of the fourth.

In the top of the fifth, Yanchak sprinted,  almost into the dugout, to catch a foul ball for the out.  Wetmore stopped the Indians from scoring by stopping two more grounders at short, tossing both to Quinlan at second for the outs.  Again, NA remained scoreless at the bottom of the inning.

In the top of the sixth, North Hills, again, pounded the ball, and the Tigers eventually let in six more runs.  Laswell caught one fly in right, and Wiethorn snagged the other two outs in left. The game ended, 21-9, North Hills.

Game two started with some hope, but the Tigers remained scoreless at the top of the first.  At the bottom of the first, North Hills got three runs before Quinlan stopped a grounder for the out at first to Marangoni, and Klinefelter and White snagged flyouts in the outfield.

At the top of the second, Klinefelter smacked a strong line drive, earning a single, followed by a deep left field triple by Wiethorn.  Yanchak earned another RBI on her flyout. In the bottom of the second, Quinlan and Wetmore both caught pop-ups, and Wetmore ended the inning with stopping a tough grounder, making the out at second.

In the top of the third, the bats came alive when Crean got things started with a single.  Quinlan and Birch both followed with doubles. Wetmore ended the inning with a strong triple.  The Tigers winning 4-3, knew they had to keep their focus and play tight. One run got by the Tigers to tie it up, but Wetmore ran deep behind third for a running flyout, then made the second out stopping a grounder and throwing to Laswell at third. The inning ended with Birch catching a dramatic fly on the run.

In the top of the fourth, NA couldn’t catch a break, but the same could not be said for North Hills.  Earning six runs that inning, the Tigers were struggling. Eventually, Quinlan stopped a grounder for the out at first with Marangoni, and Klinefelter and Birch both caught flyouts in the outfield.  NA was now trailing, 10-4, heading into the top of the fourth.

First up at bat, Crean got walked, then advanced to third when Quinlan hit a double.  After two more walks, the Tigers earned one run, but, unfortunately, that wasn’t enough as they headed into the bottom of the fifth.  North Hills ran in four more runs, cutting the game short, and the Tigers fell to the Indians, 14-4.