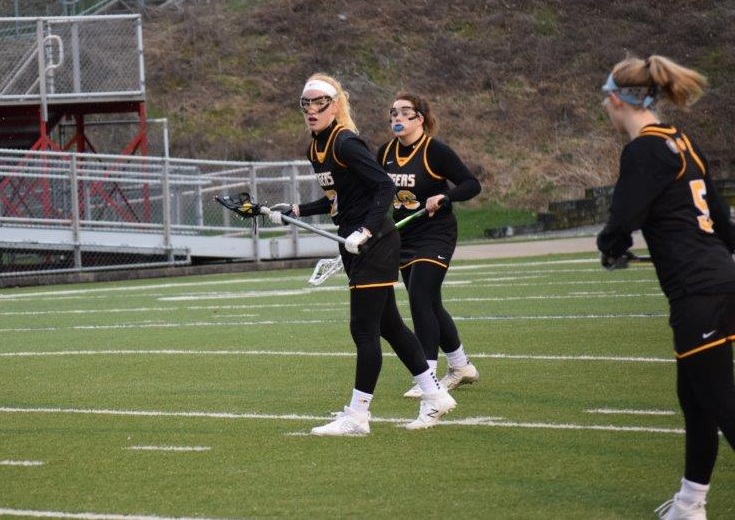 Three goals and nine groundballs from freshman Katie Oates were not enough as North Hills edged the North Allegheny girls’ lacrosse team on Monday night, 9-8, in Section 3-AAA action. As has been ritual this season, the Lady Tigers trailed at halftime but stormed back in the second half.

Down 4-2 at intermission, NA opened the second half with three of the first four goals to tie the game at 5-5, getting markers from Nicole Atkinson, Ryley McClellan and Oates.

The Indians answered North Allegheny’s second-half spurt with two straight goals for a 7-5 advantage with 12:59 to play.

Unrelenting, the Lady Tigers second-half surge continued with three of the next four goals to even the score at 8-8 with 4:24 remaining. Junior Brooke Ferringer, freshman Skye DePrado and Oates all tallied goals for the Tigers down the stretch. Ferringer totaled two goals in the game for her team-best 26th and 27th on the season. Junior Lexi McClure notched an assist to help support the offense. Atkinson had a strong performance by winning 14 of 20 draw controls.

Despite the comeback bid, North Hills pulled out the win in the late stages of the contest when Julea Jamison scored her fourth goal of the night with 4:24 left in the game for a 9-8 triumph.

Following the loss, North Allegheny slides to 2-5 overall and 2-4 in Section 3-AAA. North Hills improves to 4-2 overall and 4-1 in the section. The Lady Tigers will try to snap a four-game losing skid with a visit to Shaler on Wednesday night.