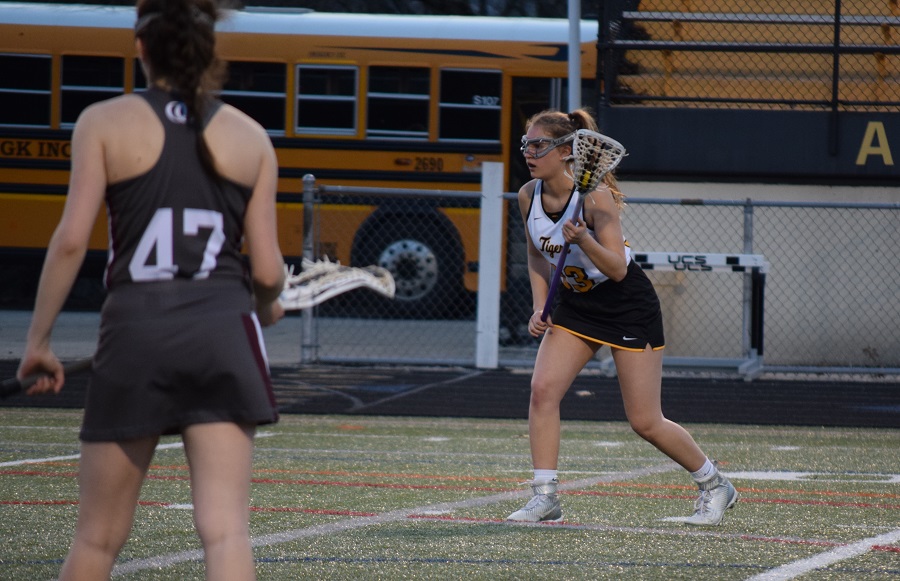 Undefeated Oakland Catholic survived a second-half rally by North Allegheny for a 14-12 win at Newman Stadium on Friday night. For the third straight game, the Tigers dug themselves an early hole only to rally back with a spirited second half effort. NA trailed by as much as six goals and came from behind to take a 12-11 lead with 7:05 remaining. Oakland Catholic, however, scored the final three goals of the contest to claim the non-section win.

Down 10-5 at halftime, North Allegheny passed the ball more effectively in the second half and ignited a rally by creating six assists on the night as a team. The Tigers began their comeback bid with two goals from Brooke Ferringer and one by Nicole Atkinson to cut the score to 10-8 within the first eight minutes of the second half. Oakland Catholic temporarily halted NA’s momentum with a goal with 15:07 remaining to give the Eagles an 11-8 advantage.

The Tigers rattled off four consecutive goals to grab a 12-11 lead. Junior Ryley McClellan scored her second goal of the night with 14:29 to play to trim the deficit to 11-9. Freshman Skye DePrado tallied her second goal of the contest just 36 seconds later to bring the score to 11-10. Junior Paige Jones tied the game at 11-11 with a marker with 8:01 on the clock. DePrado completed her hat trick and the comeback by scoring with 7:05 remaining in regulation to give NA its only lead of the game at 12-11.

Unfortunately for the Tigers, Oakland Catholic proved resilient and scored three straight goals for a 14-12 victory.

With the loss, North Allegheny slides to 2-4 overall. Oakland Catholic remains unbeaten with a 4-0 record. The Tigers return to section action on Monday at 7:30 p.m. with a visit to North Hills.