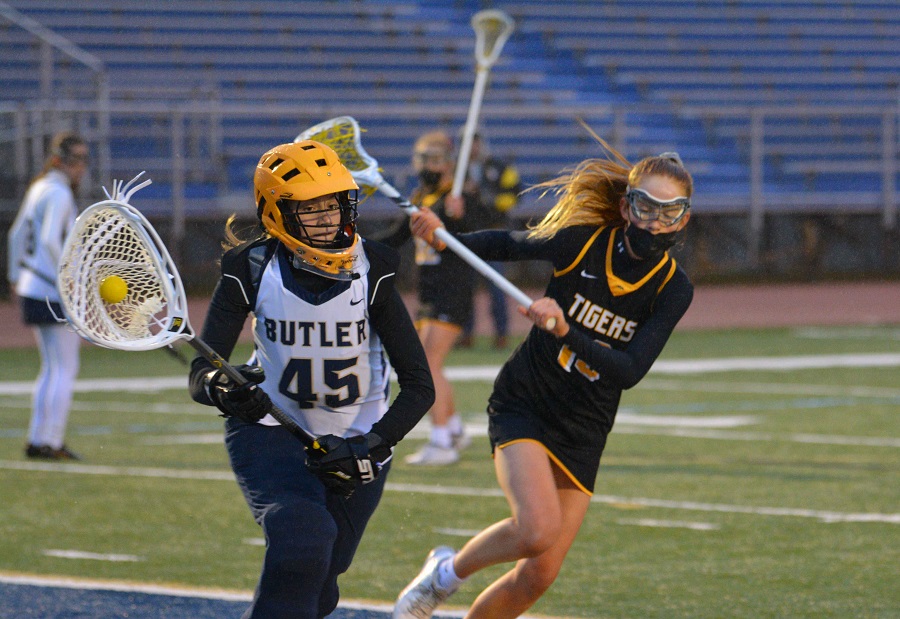 The winning ways continued for the North Allegheny girls’ lacrosse team with a 14-5 section triumph at Butler on Friday night. The win was the Tigers’ sixth win in a row and keeps them undefeated in section play.

The defense set the tone for the Tigers, limiting the Golden Tornado to just 11 shots on the night. To their credit, the Golden Tornado kept things close in the first half despite their limited shot total, trailing 5-2 at intermission. However, the second half was all North Allegheny as the Tigers pulled way, outscoring the GT’s 9-3 over the final 25 minutes.

Skye DePrado had a monster game and sparked the offense with a game-high seven goals. Katie Oates, Lola Wilhite and Bella Falo all had two goals each and Emma Lafayette tallied a marker as well.  Mila Prusak helped facilitate with a team-best two assists and Wilhite allowed NA to dominate possession time with eight ground balls. Makenna Tuman also played a key role in the Tigers efforts to control possession, winning 13 of 19 draw controls.

North Allegheny improves to 6-1 on the season and a perfect 4-0 in Section 2-AAA. Butler falls to 1-6 overall and 1-3 in the section. The Tigers will host Shaler on Tuesday night. The game will be broadcast live via the internet on the North Allegheny Sports Network.