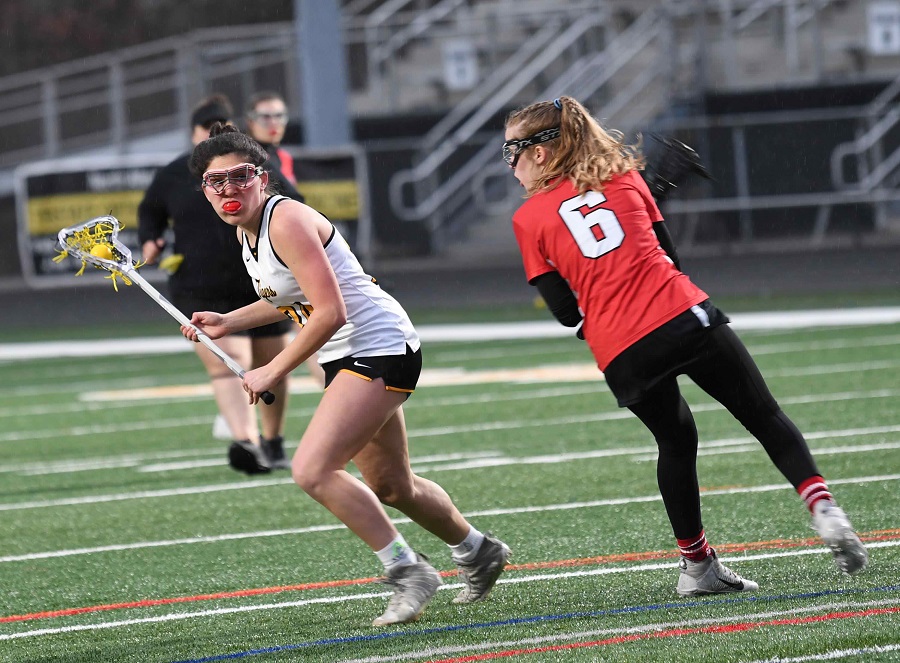 A second half scoring frenzy by North Allegheny turned a close game into a 20-12 victory over North Hills on a rainy Tuesday night at Newman Stadium. The Tigers led 12-11 with 16:38 remaining in the second half before scoring seven consecutive goals on their way to a third straight Section 2-AAA triumph.

The first half was back-and-forth between the two teams featuring four ties and three lead changes. With the help of a first-half hat trick by senior Bella Falo, North Allegheny held an 8-7 advantage by intermission. Falo finished with a team-high six goals and seven points on the night.

In the first 25 minutes, neither team lead by more than two goals. In the early stages of the second half, the Tigers twice built a three-goal lead. However, the visiting Indians fought back each time and cut the NA lead back to one goal, 12-11, with 16:38 left to play. North Hills was sparked by three goal performances from sophomore Abby Kroggman and senior Mya Bolinda.

That’s when North Allegheny took control of the game by scoring the next seven goals, and eight of the final nine markers, to claim a 20-12 victory. Sophomore Isla Abrams scored four goals in the second half and totaled five goals and one assist for the contest. Abrams also dominated the faceoffs on the night by winning 18 of 25 draws. For an outstanding all-around effort, Abrams was named the Wright Automotive Player of the Game.

It was another balanced effort by the North Allegheny offense with seven different players scoring goals. Senior Allison Lyon notched her first hat trick of the season, while Leigh Failla and Mila Prusak netted two goals each. Also scoring goals were Maya Evans and Sofia Mianzo. Prusak finished with four points, adding two assists, and junior Laurel Donley touched the scoresheet with a pair of assists. In net, sophomore goalie Izzie Trunzo made 11 saves to earn the victory.

North Allegheny improves to 3-2 overall and 3-1 in Section 2-AAA. North Hills falls to 2-3 overall and 1-3 in the section. The Tigers will visit Moon on Thursday night for another tough section contest at 6:30 p.m.