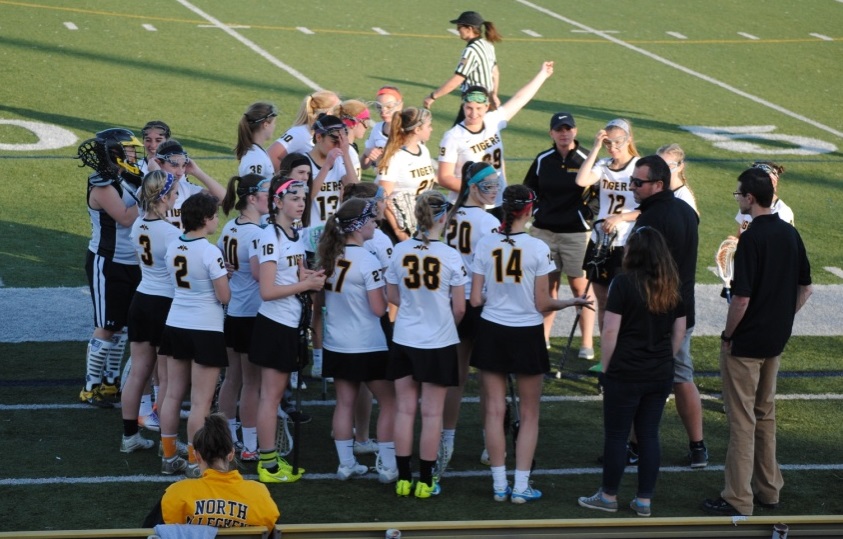 Thanks to a barrage of second-half goals, the North Allegheny girls’ lacrosse team defeated the Sewickley Academy Panthers, 12-10, on senior night at Newman Stadium. The Tigers trailed 6-4 early in the second half before scoring eight unanswered goals to gain command of the game.

Following NA’s onslaught of eight consecutive goals in the second half, the Tigers held a 12-6 advantage. Sewickley Academy managed to score the final four goals of the game but by then it was too little, too late. Antoinette Heil led the Panthers with a hat trick, while Jane Blaugrund and Maddie Braksick added two goals each.

Along with the North Allegheny offensive outburst in the second half, junior goalie Katie Shideler was a key contributor to the win. Shideler stopped a bevy a quality scoring opportunities by Sewickley Academy to allow the Tigers to vanquish the Panthers. For her efforts, Shideler was named the Wright Automotive Player of the Game by the North Allegheny Sports Network.

With the win, North Allegheny improves to 3-11 overall and 2-10 in Division 1, Section 2. Sewickley Academy falls to 2-11 overall and 2-9 in section play. The Lady Tigers conclude the season on Friday night with a road contest against Hampton.