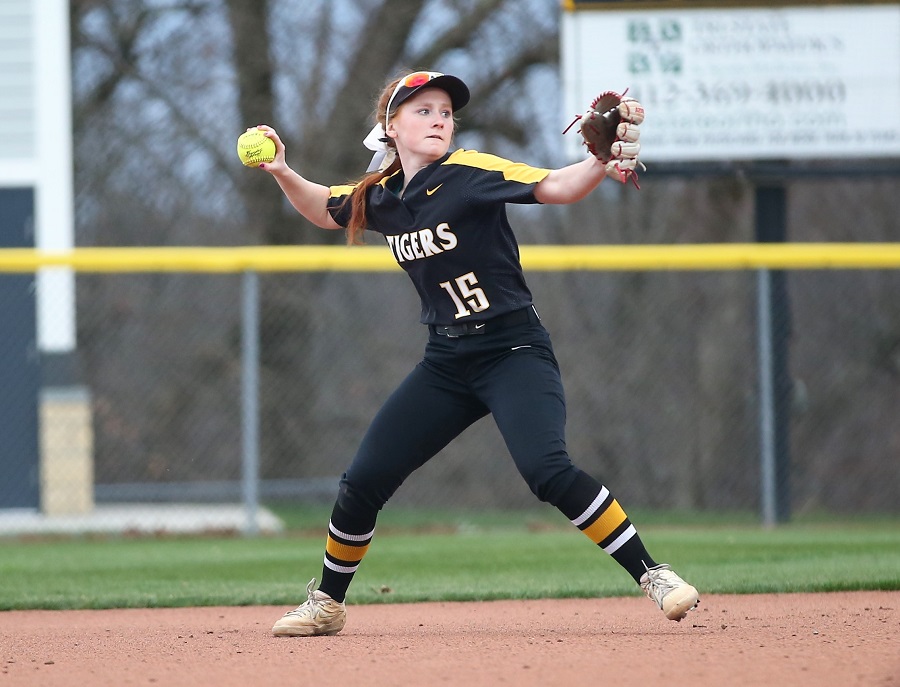 The Big 56 Conference announced its All-Section Teams on Wednesday morning and seven members of the North Allegheny softball team were recognized, including two second-team honorees.

Grabbing first-team honors for a second consecutive season, Whipkey leads the Tigers in home runs (7), RBI (16), runs scored (21) and walks (15). The California University of Pennsylvania commit owns a .328 average and a 1.212 OPS. Whipkey has also robbed opponents with several astonishing catches and defensive plays at shortstop this season.

The ultra-fast McDonough has provided on her fair share of web gems in centerfield and is a great table setter at the top of the lineup with a .347 average, 14 runs scored and 11 RBI. The lefty hitter is verbally committed to the University of Pitt-Johnstown. It’s the second consecutive season McDonough has been honored by the Big 56, earning second-team recognition last season.

After a two-year layoff, Deitrick returned to the field this season in a big way with a .359 average and has provided a solid presence behind the plate and at first base defensively. A power bat in the middle of the order, Deitrick has belted a pair of home runs with five RBI and eight runs scored. The Juniata College commit smacked a solo homer in the opening round of the WPIAL playoffs in a 8-0 win over Peters Township.

Brokos is making her first appearance on the Big 56 All-Section Team. She’s posted a .250 average in 48 at bats with 11 RBI and 13 runs scored so far this season. On April 5, Brokos had one of her best days of the season with a three-RBI performance against reigning WPIAL champion Bethel Park. She also went 3-for-5 with an RBI and three runs scored, including the game-winning run, in a thrilling 8-7 extra inning win against Norwin on April 23.

Isaacs is a two-year starter at second base for the Tigers and is hitting .356 on the campaign with 14 RBI and 13 runs scored. Swinging the bat her best when it matters most, Isaacs is 4-for-6 in two playoff wins with a pair of RBI and two runs scored.

Another hot hitter in the postseason is Vaupel, who is currently on a four-game hitting streak with four RBI in that span. For the season, Vaupel is hitting .265 with nine RBI and 15 runs scored. Appropriate to the Pittsburgh area, Vaupel is a right fielder who wears No. 21 and has limited opponents on the base paths with her strong throwing arm.

Coming off an impressive freshman season, Melle has continued to progress in the circle during her sophomore year with a 9-5 record and 3.31 ERA in 18 appearances and 15 starts. In 86.2 innings, Melle has fanned 64 batters with 30 walks. Melle has also been stellar at the plate, boasting a team-best .378 average with a home run, 11 RBI and eight runs scored.

All seven players have been prominent figures in North Allegheny’s run to the WPIAL Class 6A semifinals with a 12-9 record. The Tigers will take on the Pine-Richland Rams in the semifinals today at 5:00 p.m.