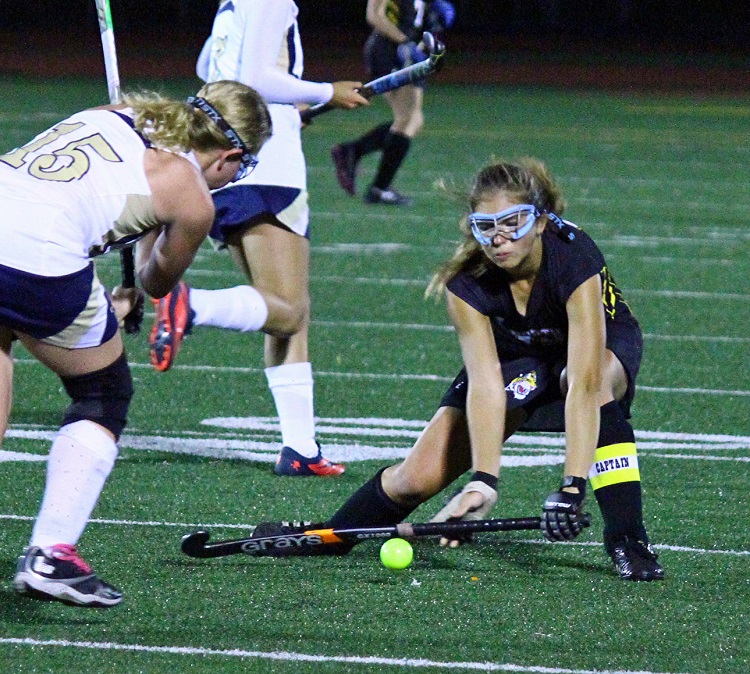 Sure-Win At Norwin For Lady Tigers

In their fifth consecutive road game, North Allegheny visited section rival Norwin on Tuesday, blanking the Knights 5-0 and advancing to 4-0 in Section 1 matches.  Under chilly fall conditions, it took only five minutes for the Lady Tigers to get on the board when the Knights’ goalie dropped down to make a save, losing sight of the ball at the goal line, following a shot by junior Nicole Burns.  Senior Briget Zehr was able to get a quick stick on the ball and poke it over the line to put NA up 1-0.  With several rushes toward the net, a determined Zehr would tally her second goal of the night only two minutes later, when junior Kendra Downey sent the ball toward the goal from inside the circle.  Zehr would make a quick turn toward the net and again shoot the ball past the Norwin goalie.  A third NA goal that was seemingly scored by senior Agathe Jaillard was waived off due to a foul in the shooting circle.  The half would end with the Lady Tigers up 2-0.

NA would also score around the five-minute mark of the second half.  Junior Jessica Brandon would take the ball into NA’s offensive zone and cross it over to sophomore Maddy Snyder who was in front of the net.  Snyder would one-time the ball directly into the back of the net to send the match to 3-0.  Zehr would again make her mark with 12 minutes remaining in the game, when Burns sent a strong pass to the front of the net, that Zehr tapped in for the hat trick.  The final goal on the night was set up during a corner that was touched by several NA players before Snyder took a shot that snuck past the goalie, and Brandon was able to tip it into the net.  The Tigers were once again assisted in the contest by strong defensive play from seniors Liza Pucciarelli and Veronica Iriart, as well as Downey and fellow junior Abby Genter.  However, juniors Hannah Downing and Nicole Burns, as well as sophomore Catie Kelly seemed to steal the show with their midfield wall that Norwin found difficult to penetrate.  The Lady Knights would tally all three of their shots on goal in the second half, but the shutout was upheld with solid blocking by junior goalie Isley Smith.  Senior goalie Morgan Mendenhall started the game, but was largely untested in the contest.

The Tiger goalies are sure to see action when they travel to Hershey for NA’s Saturday match-up with State Champion Lower Dauphin.  A second game will follow against either Warwick or Cumberland Valley.  The next home game is against Pine Richland on Tuesday, 9/24/13.  Game time in that match is set for 7:30 (jv 6:15.)