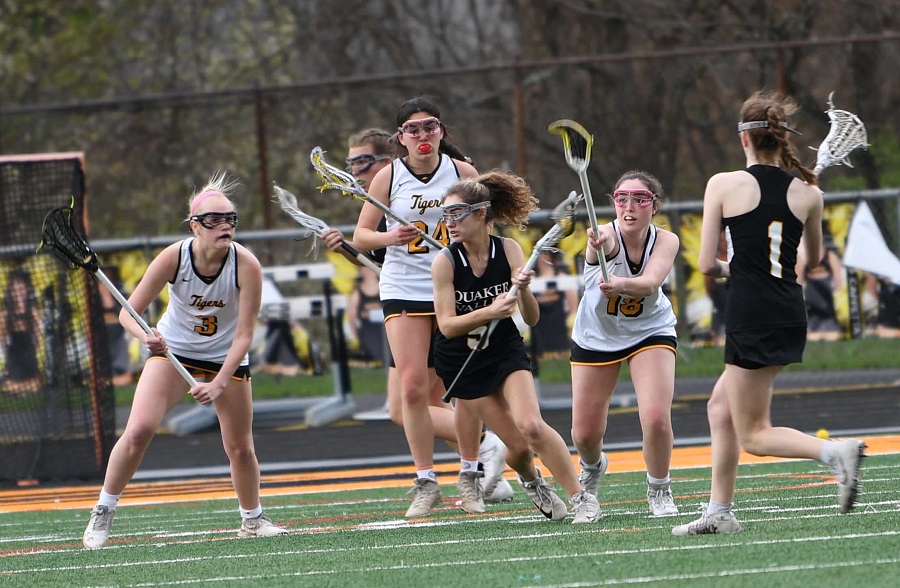 Tigers Clamp Down On Quakers For 14-10 Win

A second half scoring explosion propelled North Allegheny to a 14-10 victory over Quaker Valley on Senior Night at Newman Stadium in non-section play. Trailing 7-6 at the half, the Tigers scored seven unanswered goals in the second to take command of the contest.

In the early going, the duo of Shannon Von Kaenel and Chase Kriebel posed problems for the Tigers as the visiting Quakers held a 6-3 lead with 7:55 left in the first half. Von Kaenel and Kriebel each netted a hat trick to pace the offense for Quaker Valley.

Two goals by North Allegheny junior Mila Prusak and another by junior Leigh Failla tied the game at 6-6 with 56 seconds left in the half, but a marker by Sydney Hewitt just 14 seconds later gave Quaker Valley a 7-6 lead at intermission.

Despite the deficit, North Allegheny owned the action in the second half and rattled off seven consecutive goals to garner a 13-7 lead with 12:49 remaining in the game. The Tigers cruised from there enroute to the 14-10 triumph.

With the win, North Allegheny improves to 7-2 on the season, while Quaker Valley dips to 5-3 on the season. The Tigers will next host Fairview on Monday night at 5:45 pm before a major section clash against Shady Side Academy on Thursday.