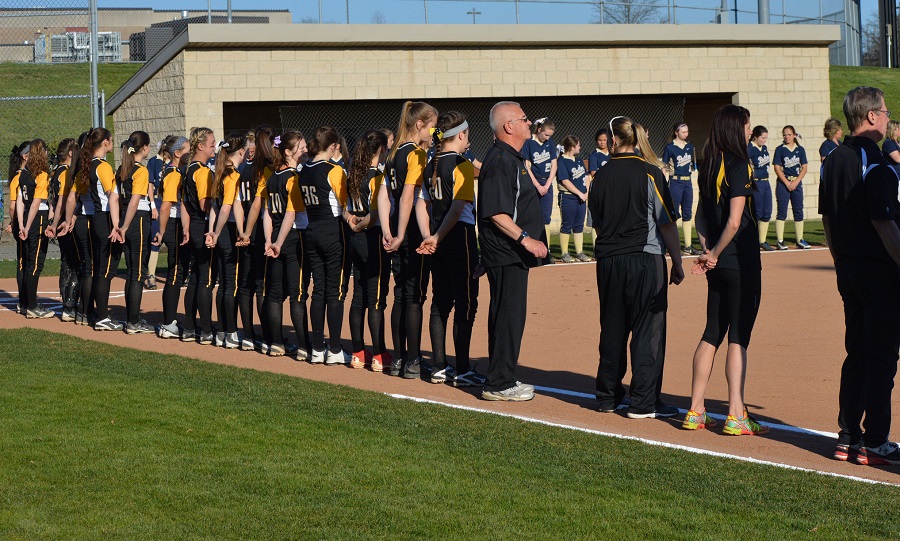 North Allegheny locked up a playoff spot, and long-time head coach Rick Meister won his 300th career  game, in a 9-0 triumph over the Pine-Richland Rams on Monday night. On a rainy night at NASH, the Tigers poured on the runs with an 11-hit attack. The offense was more than enough for pitcher Madi Beining who scattered six hits for her fifth shutout of the season.

The Tigers immediately took advantage of Rams starter Kailtyn Carr who surrendered three runs in the first inning. After two quick outs to start the inning, Liz Scherer singled and scored moments later on an RBI double by Rachel Martindale. Martindale trotted home on and RBI single by Beining for a 2-0 lead. Allie Green followed with an RBI double that plated Beining’s courtesy runner Brooke Serbin and the NA lead swelled to 3-0.

In the third inning, Green produced a sacrifice fly that sent home Scherer to improve the NA advantage to 4-0. The Tigers batted around in the fourth inning which was highlighted by a sac fly RBI by Anna Pilotta, an RBI double by Scherer and an RBI single by Martindale for a 7-0 lead. Martindale scored later in the inning on a PR throwing error to make the score 8-0, Tigers.

North Allegheny tacked on one more run in the fifth inning courtesy of another RBI double by Scherer to bring the score to its eventual final, 9-0. Scherer finished the night by going 4 for 4 with two doubles, two RBI and three runs scored. For her efforts, Scherer was named the Wright Automotive Player of the Game.

Following the win, North Allegheny jumps to 13-1 overall and 10-1 in Section 3-AAAA. Pine-Richland falls to 8-8 overall and 4-7 in the section. The Tigers will visit Butler this afternoon in another section fray.