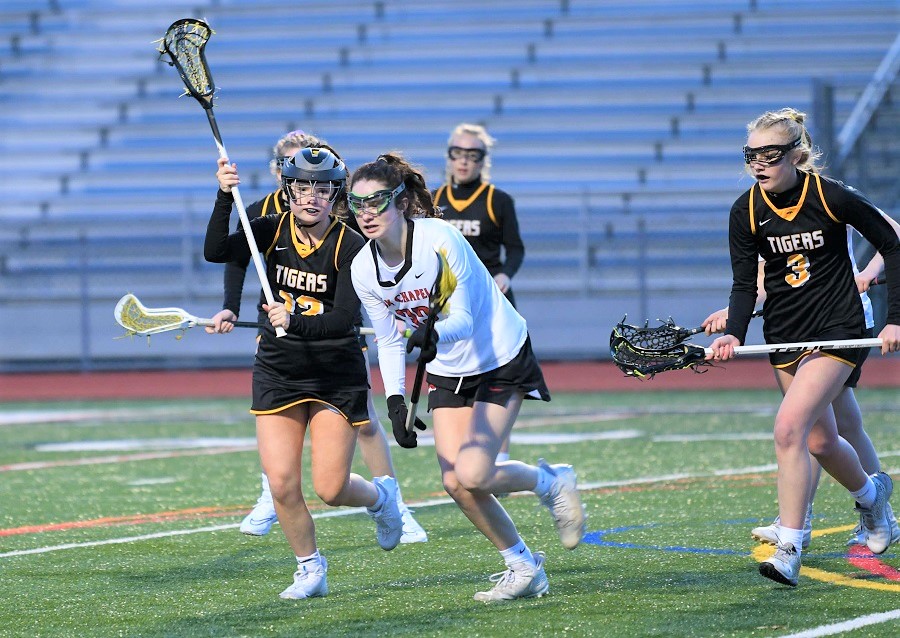 A strong second half by Fox Chapel led the host Foxes past North Allegheny on Tuesday night, 13-8, in the Section 2-AAA opener. Tied 5-5 at intermission, Fox Chapel outscored NA 8-3 in the second half to claim the victory.

The night started well for North Allegheny, who built a 5-2 lead on the strength of a first half hat trick by senior Bella Falo and two markers by senior Mila Prusak. With 10:24 remaining, the Tigers appeared to be in command before the Foxes scored three times late in the half to tie the score at 5-5. Sophomore Sydney Schutzman, who scored a game-high six goals, knotted the score with just 10 seconds remaining in the half on her first marker of the night.

Schutzman and North Allegheny’s Isla Abrams traded goals early in the second half and the score was tied again at 6-6 with 19:54 remaining in the contest. From that point on, Fox Chapel controlled the draws, possession time and the game and pulled away by scoring the next six consecutive goals for a 13-6 lead with 13:32 to play. Along with Schutzman’s six goals, Sydney Kennedy added a hat trick as well to help pace the Foxes.

North Allegheny finished the night with back-to-back goals by Falo and Prusak to bring the final score to 13-8, Fox Chapel. Falo led the NA offense with four goals, while Prusak notched a hat trick and added an assist.

Senior Allison Lyon was 2-for-2 on draws for the Tigers in the second half, along with four draw controls, three caused turnovers and two ground balls for the Mercyhurst commit. Junior Leigh Failla caused three turnovers and collected four ground balls. Senior Amelia Henderson corralled a team-high five ground balls, while sophomore goalie Izzie Trunzo made seven saves in net.

The loss drops North Allegheny’s record to 0-2 overall and 0-1 in Section 2-AAA. Fox Chapel improves to 2-0 overall and 1-0 in section play. The look to bounce back on Thursday night with a home date against Freeport at 6:30 p.m. The game will be broadcast live by the North Allegheny Sports Network.