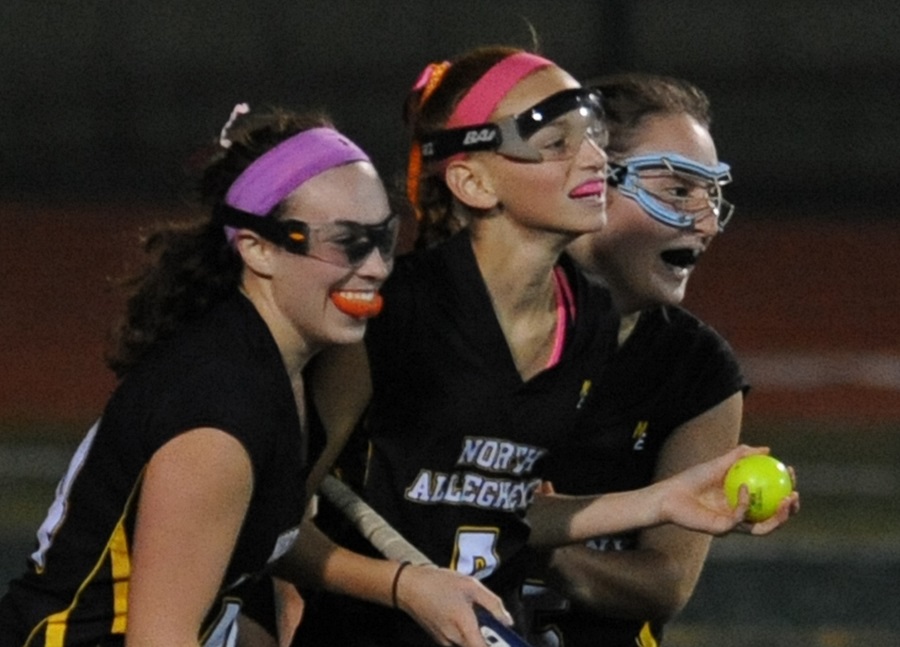 The North Allegheny Tigers field hockey team traveled up the road to Pine Richland to take on the Rams on Wednesday in their final regular season game. The rivalry between the top two teams in Section 1 is hot, and the players did not disappoint.  The determined Tigers scored twice in the second half to overcome a 1-0 halftime deficit and defeat the Rams 2-1.

A turf war raged in the first half as the leaders of both teams tussled in the middle 40 yards of the field. The passionate midfield play of seniors Jessie Serody and Maddie Birmingham helped the Tigers repeatedly infiltrate the Rams’ circle, resulting in several penalty corners, none of which the lady Tigers could convert into a score.  At the extreme end of the half, with time waning, Pine Richland quickly converted a turnover into a breakaway that found an open forward at the top of the circle.  The shot was bulleted and crossed to the back left corner of the cage to give Pine Richland a 1-0 lead.  It was the first time this fall that North Allegheny trailed a section foe.  The Tigers had six penalty corners and six shots on goal in the half, Pine Richland had four penalty corners and three shots on goal.

The Lady Tigers rose to the occasion and approached the second half with renewed purpose. Less than one minute in, after intense pressure on goal caused an infraction on the goal line, the team was awarded a penalty stroke.  Serody’s brisk flick to the right edge tied the game and energized the Tigers.  While NA played with fervor, they couldn’t find purchase and the score remained tied for the bulk of the half.  At just under eight minutes left, junior forward Brooke Cameron working the right wing to her advantage, centered the ball in front of the cage.  Freshman forward Lexi McClure aggressively fought for the shot on goal.  Her initial shot, saved by Pine Richland goalie Bella Bailie, rebounded to freshman forward Angie Genter who was in the right spot to beat the drove of Rams around the cage and pop in the go ahead goal.  With senior Catie Kelly expertly anchoring the NA defense, Pine Richland couldn’t mount a comeback and the game ended 2-1.  Final game statistics reveal NA’s surge in the second half – with 11 corners, 15 shots on goal, 1 defensive save for Birmingham, and 4 goalkeeper saves.  PR final stats show 5 corners, 5 shots on goal, 1 defensive save, and a whopping 13 goal keeper saves.

The victory moved NA to 10-0 in section and 12-6 overall, preserving the North Allegheny Field Hockey section unbeaten streak throughout their season at 49 games. The game also saw the comeback of two key defensive players previously sidelined due to injury, juniors Lily DeNoma and Gabby Herbert.  Their presence will surely be an asset as NA heads into the WPIAL playoffs hosting Peters Township in Round 1 on Wednesday, October 28th at Newman stadium (game time TBA).