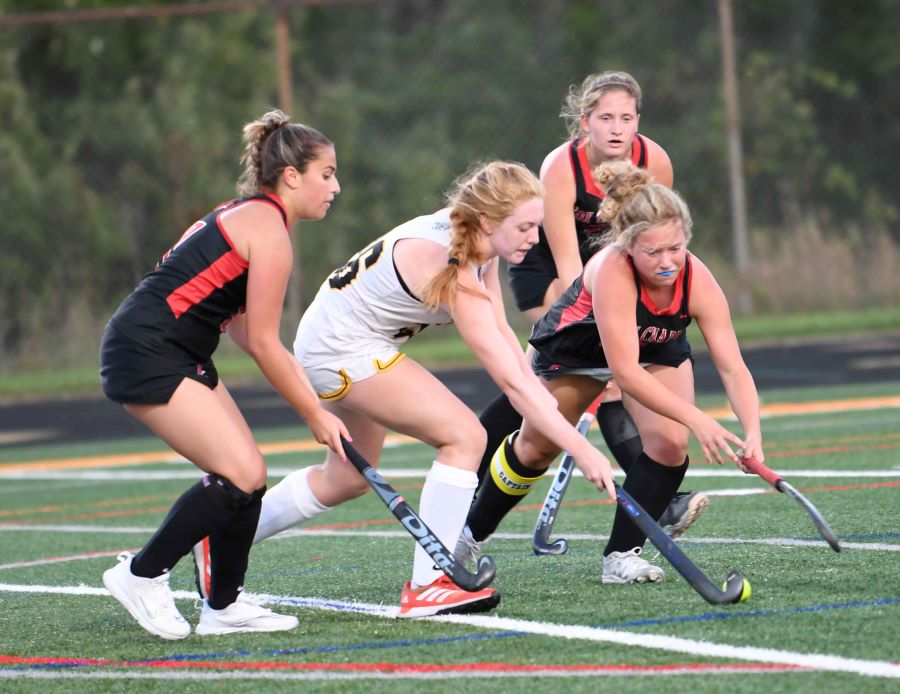 Tigers Roll To 7-1 Win Over Foxes

Fox Chapel entered Tuesday night’s game after handing Mt. Lebanon a 5-2 defeat a day earlier. With thoughts in mind of beating another Class 3A foe, the Foxes took an early lead when Emma Srodes scored with 8:56 on the first quarter clock.

The Fox Chapel goal proved to be a mirage, however, as North Allegheny dominated for the rest of the night. Senior Lauren Kampi, who announced her verbal commitment to Millersville University over the weekend, tied the game at 1-1 with 5:48 left in the first quarter.

Displaying her electric speed, junior Isla Abrams raced away from the Fox Chapel defense for a breakaway goal with 12 seconds remaining in the opening stanza to propel NA to a 2-1 lead.

In the second quarter, senior Callie Rautenbach scored on a pair of penalty corners to balloon the Tigers lead to 4-1 by halftime. The Tigers were 3-for-8 on penalty corners on the evening, while the Foxes were limited to an 0-for-7 on corners.

Junior Tanvi Challa and sophomore Josie Schomburg netted goals in the third quarter to increase the NA advantage to 6-1. Kampi put the finishing touches on the victory with one final goal with 13:30 left in the fourth period to cap a 7-1 triumph. A sparkplug for the NA attack throughout the night, Kampi was named the Wright Automotive Player of the Game.

With the win, North Allegheny improves to 1-1 on the season, while Fox Chapel falls to 2-1. The Tigers return to action on Tuesday, Sept. 6 at Mt. Lebanon for the Section 1-AAA opener.