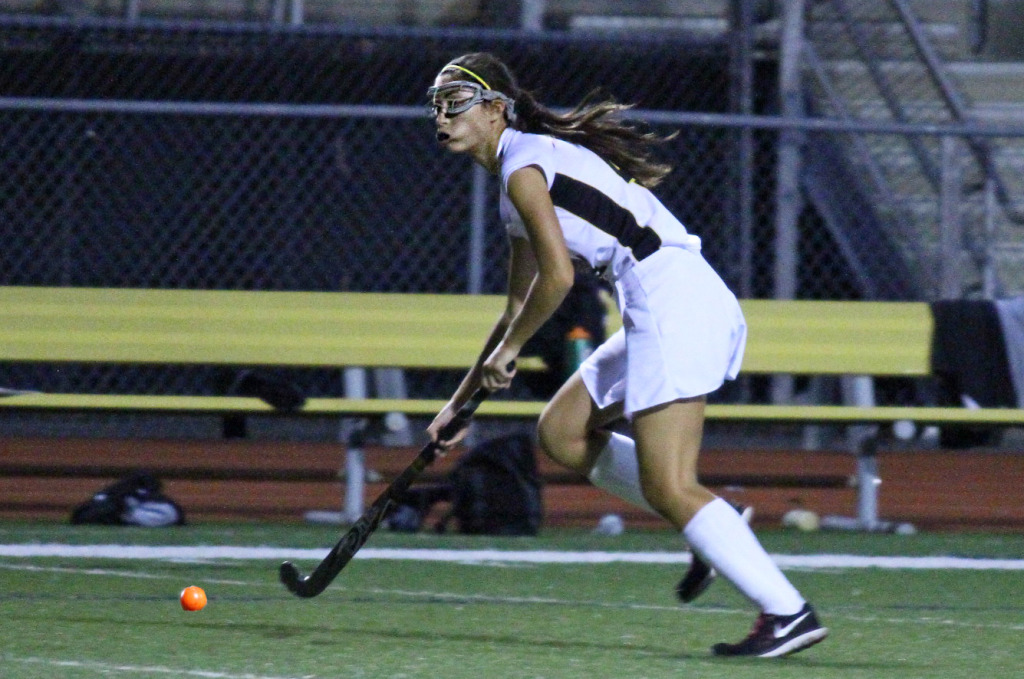 The Tigers hosted the Norwin Knights on Thursday at Newman Stadium, squelching the Knights’ offense and hustling to a 7-0 victory.  With the intensity of the Monday battle at Pine Richland still just a few days old, the Tigers needed a little extra time to pull together and mount their scoring run.  After allowing Norwin to break up their passes and move the ball to the Tiger defensive zone a couple of times, NA finally settled in and landed their first tally roughly 18 minutes into the game, when they took the lead on what would prove to be the game winning goal.  Junior Maddy Snyder would accept a crossed pass from senior Jessica Brandon on the right side and slide it into the cage, to take a 1-0 lead.  Although the Tigers would pepper the tough Norwin netminder, Lauren Slivka with 13 shots, the half would come to a close before the Tigers could notch another goal.  The Tiger defense held strong, giving up no penalty corners in the half and only allowing one shot on goal, which was saved by senior Isley Smith.

NA seemed to find their groove in the second half, with their first tally coming in the opening minute, and the second just two minutes later.  Senior Megan Guzzardi would score on a slap shot when she picked up the rebound following an Alyssa Leonard shot.  Shortly thereafter, Brandon would send the ball to Leonard in the middle and this time Leonard would find her mark with a wrist shot to move the Tigers to 3-0.  In the following minute, the fourth goal would be scored, when senior Hannah Downing used an aerial to put the ball beyond several Norwin defenders where it was picked up by sophomore Erin Coran and dribbled down the left side toward the goal.  Coran’s pass to Downing would allow the midfielder to  take a slap shot that sent the Tigers to 4-0.  Downing would take another slap shot just four minutes later that was tipped in by junior Anna Zahren.  It would be Zahren who set up the next two goals, one on a cross from the right side that was wristed into the net by sophomore Brooke Cameron, and the second that was passed to Coran who scored just 10 seconds before the final buzzer.  The Tigers took 10 shots on goal in the second half to amass their 6 tallies, while keeping Norwin off the board with two saves by sophomore Katie Shideler.  The game would end with a final score of 7-0 Tigers, bringing the Tigers’ season record to 6-0 in WPIAL AAA Section 1, and 10-1 overall.  For her efforts, Zahren would be named Wright Automotive Player of the Game.

The Lady Tigers travel to Hummelstown (Hershey) on Saturday to meet stiff competition and challenge their level of play in the Lower Dauphin tournament.  The Tigers will take on two state ranked teams, host Lower Dauphin (#1) and Cumberland Valley (#5.)  Two weeks ago, the Tigers registered their only loss this season (2-1) to the non-WPIAL Hershey team that is currently ranked #4.