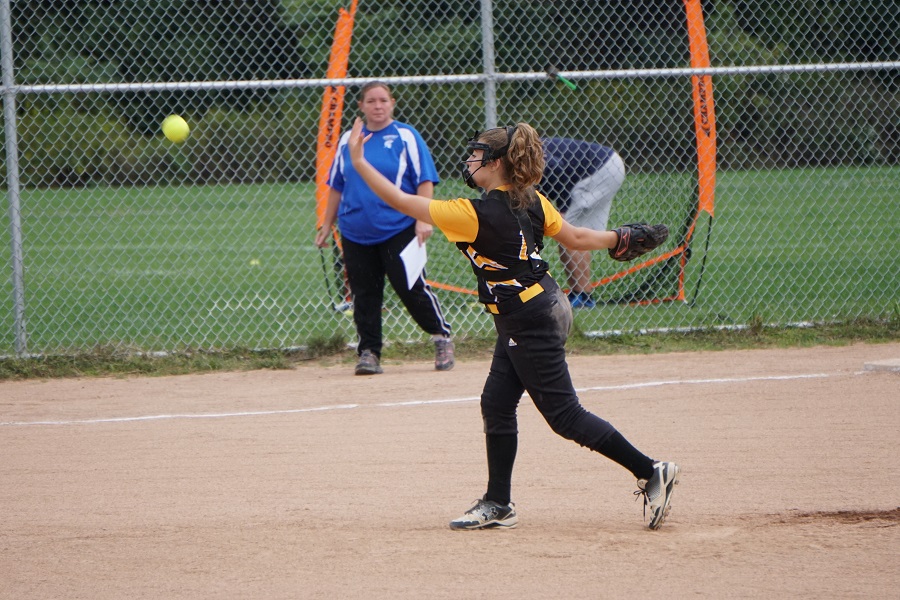 Tigers Shut-Out Hempfield In Both Games of Doubleheader Sweep

In the second week of the season, NA’s slow-pitch team continued to dominate its opponents; this time Hempfield falls to the Tigers 20-0 and 21-0.

Starting off strong on defense, Abby Birch (senior) snagged a shallow fly right behind second base.  This was followed by another fly out by Madison Klinefelter (junior) in left center and a strike out by Evie Wiethorn (sophomore).  In the bottom of the first, Birch got the team started off offensively, as well,  with a home run to deep right center. Klinefelter drove in two runs, Wiethorn one run, and Emily Yanchak (sophomore) hit in one. Meg Patterson (junior) finished out the first inning with a triple, gaining one more run.  The Tigers jumped into the second inning with a substantial lead at 6-0.

At the top of the second, NA’s defense refused to allow Hempfield to gain momentum, and Wiethorn struck out one more Spartan to keep them off the scoreboard.  In the bottom of the second, Birch and Kenna White (senior) both hit strong doubles and Lizzie Wetmore eked out a triple, ending the second inning at 10-0.

In the third inning, again, the Tigers kept Hempfield from scoring with a fly out to Klinefelter in left center, another strike out by Wiethorn, and a fly out to Wetmore at shortstop.  Hempfield only allowed one run batted in by the Tigers in the bottom of the inning, this time by Megan Quinlan (sophomore).

In the top of the fourth, Wetmore made all three outs: a flyout, a throw to Katie Marangoni (junior) at first, and a toss to Quinlan at second.  The Tigers came back in the bottom of the fourth and were relentless.  Wetmore, Marangoni, and White hit doubles, and single RBIs were smacked in by Quinlan, Patterson, Wiethorn, Birch, and Claire Medic (junior).  Marangoni ended the inning with her second double of the inning and another two runs!

The Tigers hold them at the top of the fifth, winning game one, 20-0.

Game two against Hempfield started strong for the Tigers.  White smacked in a three-run homer, followed by another home run by Wetmore. Birch hit a triple;  Marangoni and White both hit doubles. Nikki Crean (sophomore) and Quinlan hit in two runs each while a single run was hit in by Yanchak, Audrey Laswell (sophomore), and Klinefelter. Now 13-0, the Spartans had quite a hole to dig out from, but unfortunately for them, the Tigers refused to give them an inch.  The tough infield stopped everything hit their way, and Yanchak struck out the third batter, ending the first inning.

Despite a number of singles by the Tigers in the top of the second, the only RBI was from Quinlan with a double.  In the bottom of the second, the Spartans were held at 0 again, but this time Carly Snyder (junior) and Klinefelter both hustled for two fly outs, and Yanchak, pitcher, ended the inning with a toss to Marangoni at first. After two innings, the score was 14-0, Tigers.

During the fourth, Wetmore and White both hit triples, earning an RBI each to bring the score to 18-0, NA.  Defensively, the Tigers, again, kept the Spartans from scoring.

At the top of the fifth and final inning, Snyder, Crean, and Birch each earned another RBI with singles.   In the bottom of the fifth, to end the game, the Tigers snagged a double play with Yanchak stopping a grounder and tossing the ball to White at third; she turned and rocketed the ball to Quinlan at second who tagged out the runner.  The game ended with another decisive win for the Tigers at 21-0.