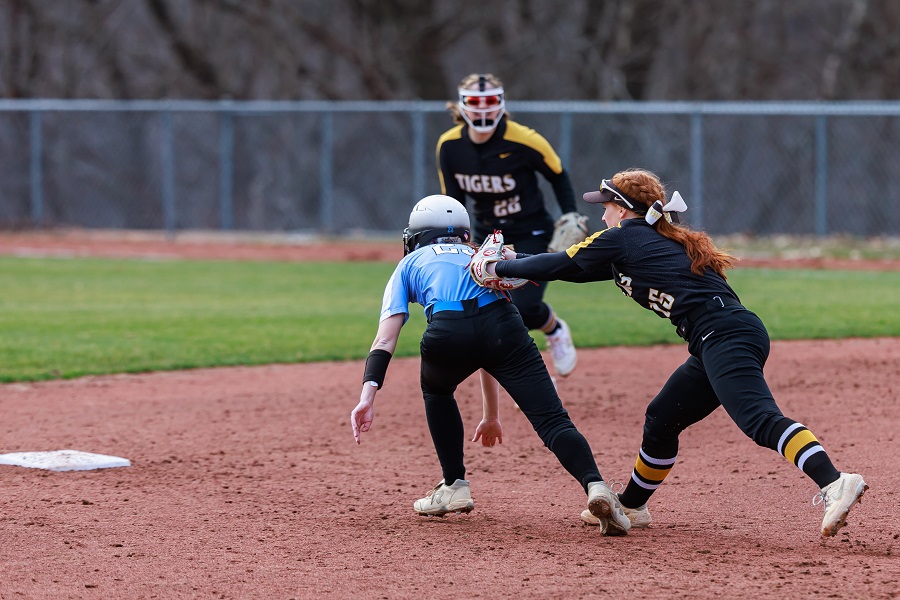 A pair of rivals got together to open 6A Section 2 play today in Wexford, and North Allegheny continued its perfect start in 2022 by besting the Raiders, 4-2.

Seneca Valley (1-1, 0-1) threatened in the top of the first by putting two runners on base with only one out. But sophomore starter Anne Melle recorded a pair of strikeouts to end the inning.

The Tigers, who had runners in scoring position in every inning, broke the ice in the bottom of the second. Ali Domachowski led off with the first of her two doubles and was sacrificed to third by Mayson Brokos. After a ground out, sophomore Carlyn Vaupel drove home the game’s first run with a two-out single.

The Raiders tied the game in the top of the third when Meah Hames, scored from third base on a throwing error. North Allegheny jumped back in front in the bottom of the inning.

After one out, Melle stroked the first of her three hits with a double to left field. Annalynn Isaacs followed with a base hit to put runners on the corners. After Isaacs stole second, Melle scored on a wild pitch to put the Tigers up 2-1.

The Raiders again tied the game with their next at bats. After two outs, Kylie Staudt singled, Emilia Pfab walked, and Hames singled to score Staudt and tie the game at 2-2.

The Tigers went ahead for good in the bottom of the fourth when catcher Sadie Kelly led off with a single. Courtesy runner Rachel Rusnica stole second and with one out, Alaina Whipkey walked, and Meghan McDonough singled to score Rusnica for a 3-2 lead.

Melle helped her own cause by driving home an insurance run in the bottom of the sixth for a 4-2 lead. Vaupel singled and reached second on a wild pitch. After two outs, Melle singled to centerfield to plate the game’s final run. Melle struck out six and allowed only one earned run to improve to (4-0) with the complete game victory.

Even though North Allegheny committed three errors, the Tigers defense finished strong with several outstanding plays. Isaacs made two of them, with a diving catch of line drove in the sixth inning, and a sliding rolling stop and flip to Whipkey at second base on a game ending fielder’s choice.

Vaupel made the other web gem with a diving catch at the line in right field to record the first out in the seventh inning. That grab, along with a 2-for-3 performance at the plate with an RBI and a run scored was enough for the sophomore Vaupel to garner the Wright Automotive Player of the Game honors.

The busy week for the Tigers (4-0, 1-0) continues tomorrow with a non-section road game at Bethel Park. Another road game vs. Norwin and home games against Canon-McMillan are also on the docket as North Allegheny faces a stretch of seven games in nine days.