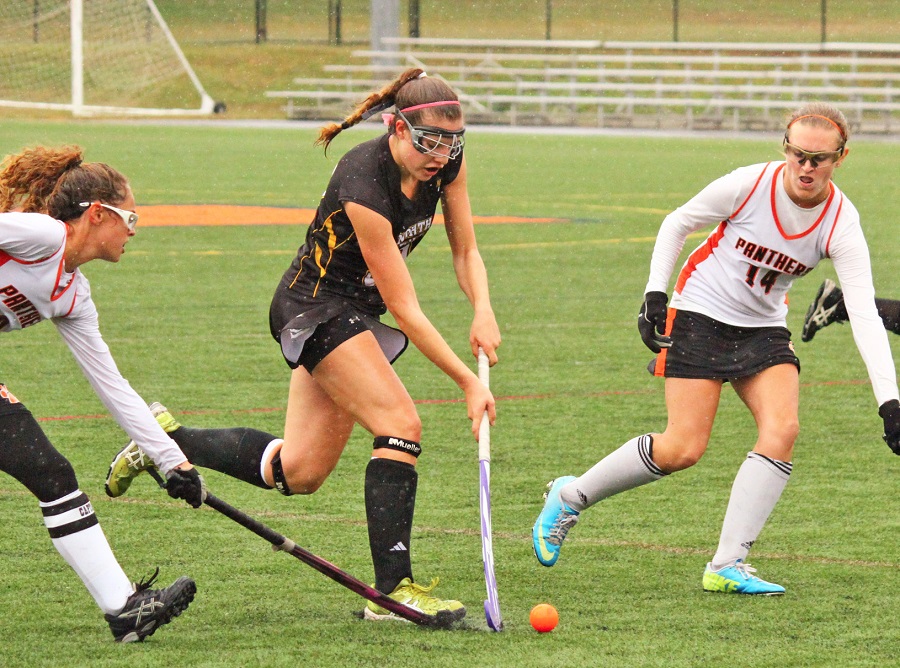 The Lady Tigers traveled to Hershey on Saturday for the 22nd Annual Hershey Field Hockey Tournament. Missing the help of two senior starters, the Tigers faced a strong Trojans lineup in game one on the beautiful Hershey field that is strictly dedicated to field hockey. NA was down 1-0 within the first three minutes, when Hershey rushed the ball into the Tigers defensive zone and scored on a shot and deflection from just inside the scoring circle. While many of the game’s free hits seemed to favor Hershey, the Tigers held their ground and created several good scoring opportunities, eventually tying the contest 13 minutes into the second half, when senior forward Jessica Brandon raced down the right alley and unloaded a slap shot through the five-hole of the Trojans goaltender. The Tigers would keep the pressure on, seeming to improve their play steadily throughout the game but were unable to hold off Hershey’s persistent offense that would capitalize less than two minutes later to put the Trojans up 2-1 and wrap up the scoring.

The Hershey match was the first major test of NA’s defense this season; and the Tigers received superb goaltending from both senior Isley Smith and sophomore Katie Schideler. Other notable players who made major contributions to the Tiger effort included senior midfielders Megan Guzzardi and Hannah Downing, junior midfielder Jessie Serody, and defender Kendra Downey. The Tigers kept Hershey in check despite being awarded only two penalty corners throughout the entire game. NA also managed to successfully defend seven of eight Hershey penalty corners and six of eight Hershey shots on goal. The lone Tiger goal was the first scored against Hershey High School in the last three years of traveling to the Hershey Tournament, and the Tigers undoubtedly came away from the game with confidence in their ability to elevate their level of play against central Pennsylvania competition.

The second Tiger game followed within minutes, against the Panthers from Central York and amidst a miserably steady downpour. NA dominated play from the start, with a lot of give and take of possession on the soggy turf. The Tigers hustled endlessly, finally taking the lead around the 24 minute mark, when Brandon was fed the ball by senior forward Kailey Vogl in the midfield and led a charge to the Panther end, knocking a backhand shot past the goaltender to take a 1-0 lead. The Panthers would answer only 30 seconds later, tying the game on a shot that was deflected from a possible high stick in the circle. After a referee powwow, the goal was awarded to Central York and the half would end moments later tied at 1-1.

The Tigers continued to force their way into the Panthers end and nearly had the go ahead goal with about 13 minutes left in the game, when junior Maddy Snyder pressed in on goal, only to have her shot blocked by a last second effort from the Panther goalie. Despite considerable determination by the Tiger offense, several other scoring chances came up only marginally short. But the Tigers would keep pressuring toward the net until junior Jessica Serody, playing center forward, pushed the ball toward the goal where it was deflected by sophomore Erin Coran and shot by Brandon to give the Tigers a 2-1 lead. Coran would be awarded the assist but the team effort from all involved would ring out loud and clear. The final goal of the game would come again from Brandon, when she stole possession around the football 50 yard line and hustled toward the middle, drawing out the Panther goaltender, darting around her, and stuffing the ball into an open net for her first career hat trick. The 3-1 lead would hold for the Tiger win and a second place trophy for the Tigers in the Hershey Tournament.