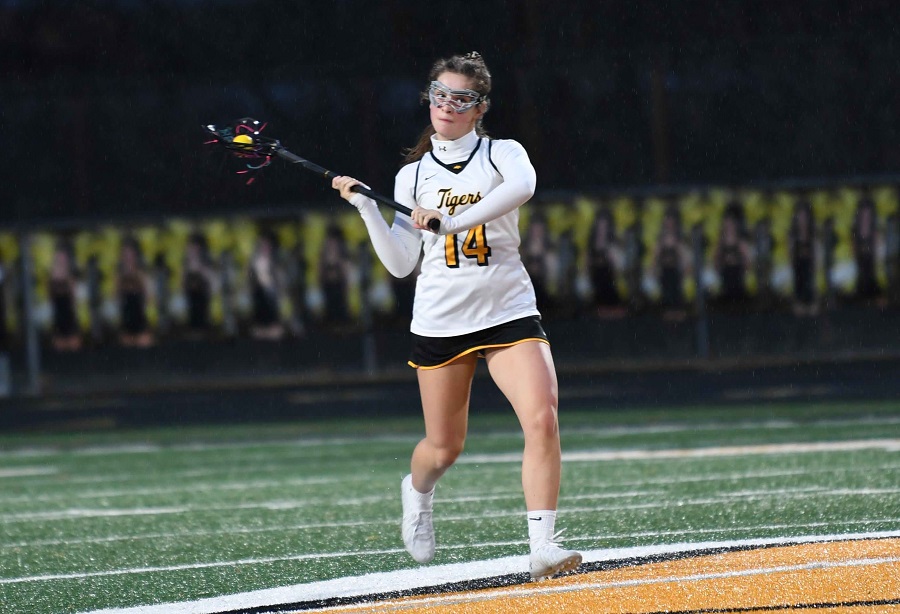 The North Allegheny girls’ lacrosse team won its fifth consecutive game on Friday night at Newman Stadium with a 17-5 blowout of Butler in Section 2-AAA action. Following a big road win at Moon the night before, the Tigers continued their early season momentum with a dominating effort against the Golden Tornado.

The night started well for Butler when junior Chloe Huba scored just 50 seconds into the game. It was the first and last lead of the night for the visiting Tornado. North Allegheny scored seven of the next eight goals to take a 7-2 lead by halftime. The offensive surge was keyed by junior Mila Prusak, who scored all four of her goals in the first half to give her 18 goals on the season. Prusak added two assists and two groundballs and was named the Wright Automotive Player of the Game.

In the second half, North Allegheny continued to pour it on and invoked the mercy rule with 6:24 remaining on the first of two goals on the night by junior Leigh Failla for a 15-5 lead. Failla and Bella Falo rounded out the scoring to bring the final tally to 17-5, Tigers.

Along with Prusak’s four-goal night, Falo also scored four goals to give her a team-leading 30 on the season. Failla, freshman Avery Anderson and sophomore Isla Abrams each tallied a pair of markers. Senior Allison Lyon, sophomore Ava Lindsay, junior Laurel Donley all netted one goal each for the Tigers. Falo, Lyon and sophomore Maya Evans registered two assists apiece and Anderson had one helper.

Senior Evelyn Vissari was Butler’s top performer with a pair of goals in a losing effort.

North Allegheny improves to 5-2 overall and 5-1 in Section 2-AAA, while Butler slips to 1-4 in the section. The Tigers will have next week to rest before hosting the Seneca Valley Raiders on Tuesday, April 19 at 6:00 p.m.