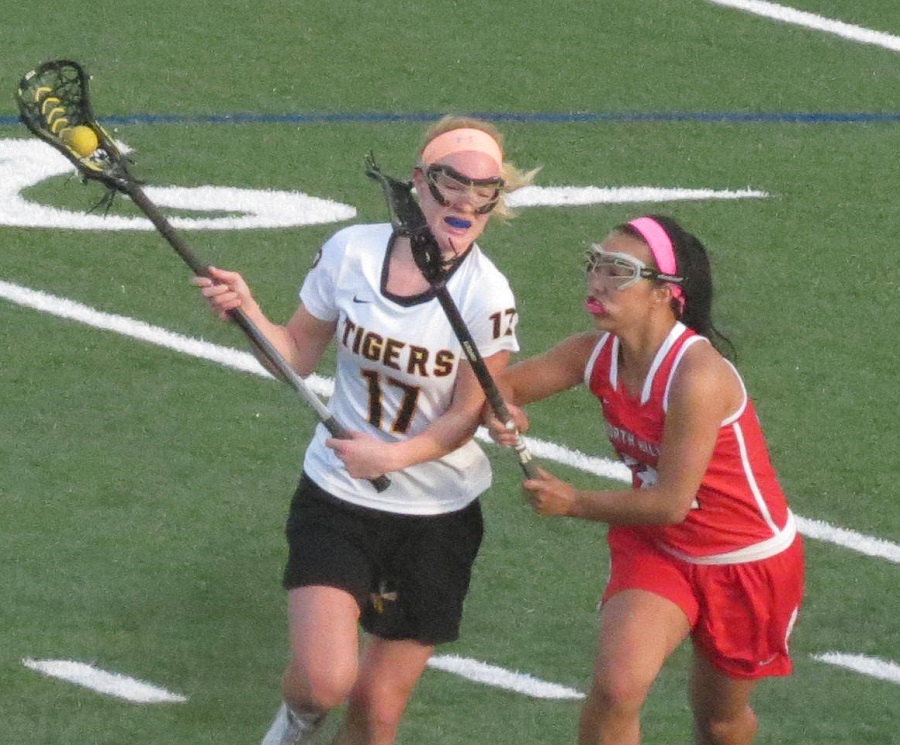 Hat tricks by senior Kara Jans and freshman Emily Warren helped Shaler to an 11-8 win over North Allegheny on Wednesday night at Newman Stadium. The game was tied 5-5 early in the second half before Shaler pulled away for the Section 3-AAA win. The Tigers received a hat trick from senior Abby Washabaugh who was selected by the North Allegheny Sports Network as the Wright Automotive Player of the Game.

The first half was tightly contested with a rapidly quick scoring pace. Shaler opened the scoring on a goal by Jans less than three minutes into the game, but NA quickly tied things up at 1-1 with a marker by sophomore Paige Jones with 21:58 left in the half. Shaler senior Shannon O’Leary put Shaler back in front, 2-1, with 20:12 on the clock. North Allegheny responded less than a minute later courtesy of a Jenna Prutting goal, the first of two on the night for the NA senior, to even the score at 2-2.

The back-and-forth trend continued when Ashley Warren scored for Shaler but NA answered with a tally by Washabaugh to knot things up at 3-3 with 15:19 remaining in the half. Jans and Isabella Harrison scored back-to-back goals for Shaler to give the Titans a 5-3 lead. North Allegheny sophomore Brooke Ferringer rifled a shot past Shaler goalie Jade Hromanik to trim the score to 5-4, Titans, by halftime.

North Allegheny struck early in the second half courtesy of sophomore Nicole Atkinson to again tie the game at 5-5 with 23:09 on the clock. However, Shaler netted six of the next seven goals, including a natural hat trick by Emily Warren, for an 11-6 lead with 7:50 remaining. Washabaugh scored the last two goals of the night to bring the score to its eventual final, 11-8, Shaler.

Following the loss, North Allegheny slips to 4-4 overall and 4-3 in section play. Shaler improves to 6-5 overall and 3-4 in the section. The Tigers return to action on Monday with a visit to Pine-Richland at 7:30 p.m.