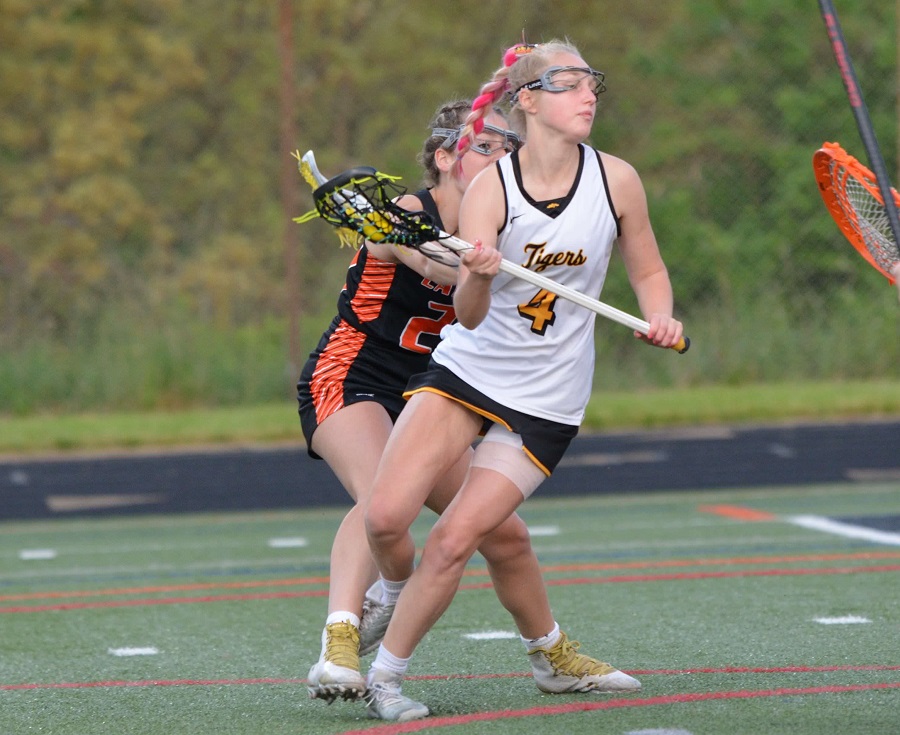 North Allegheny’s banner season continued on Monday night with a 20-2 win over Greater Latrobe in the opening round of the WPIAL Class AAA playoffs at Newman Stadium. Having already set a new program standard for victories in a single-season, the Tigers also captured their third-ever playoff win in dominating fashion and scored the first nine goals of the night within the first eight minutes of the game.

Among the first nine goals, senior Katie Oates netted her 100th career goal and finished with a pair of markers, leaving her with 101 on her career. For surpassing the century mark and helping NA secure a convincing win, Oates was selected as the Wright Automotive Player of the Game by the North Allegheny Sports Network.

North Allegheny and Latrobe dueled for the first time since 2009 on Monday night and the Tigers were unwelcome hosts to their unfamiliar foe. Setting the tone from the very start, senior Makenna Tuman won the opening draw control and senior Lola Wilhite scored just 1:21 into the game for an immediate 1-0 lead. Tuman won seven draw controls and delivered a great field presence as NA held a firm command in time of possession.

With the Tigers owning possession time, they also controlled the scoreboard and raced to a 9-0 lead by the 7:36 mark of the first half. Latrobe’s Carolina Walters broke up the Tigers’ run with a goal at the 9:21 mark of the half, but the tally did little to thwart NA’s momentum. North Allegheny scored the next eight goals and cruised to the victory.

Sixth-seeded North Allegheny improves to 15-3 overall, while 11th-seeded Latrobe’s season comes to a close with an 8-11 record. The Tigers advance to the WPIAL quarterfinals where they’ll face section rival Shady Side Academy on Wednesday night at 6:00 p.m. at Upper St. Clair High School. The game will be broadcast live via the internet on the North Allegheny Sports Network.